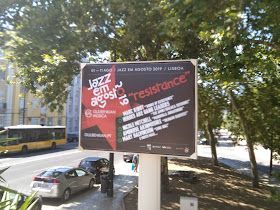 Brilliant blue, in the mid-20s (80 F), with a light breeze, the weather could not have been more inviting for a long walk through the jumbled city, and so I begin the day with an exploration of the Gulbenkian grounds. Back when I began my undergraduate work in the early 90s, I thought I would become a landscape architect. My goal was to create spaces with places with little nooks to play a guitar in. Had I wandered the grounds of the Gulbenkian Foundation during those impressionable and formative years, I think I would not have veered off course like I did. The grounds are a mid-century modern mix of functional concrete slabs, winding trails through thickets of trees and bushes, coy filled streams flowing around and under the footpaths, and brazen ducks - and turtles - hamming it up for photos and feeding. Around the corners, under a canopy of leaves, benches beckoned, nooks abounded, and my hands longed for a guitar. However, I found solace in a nice strong cup of coffee at one of the small cafes lining the grounds, and felt that I could be easily convinced that I was wandering inside my own dream.


Friday's event began inside an auditorium with an austere darkend stage, perfect for Norwegian vocalist and electronics artist Maja S.K. Ratkje's solo sonic atmospherics. Ratkje manipulates her vocals - sometimes lyrics, often sounds - as well as other small instruments using loops and layers to achieve rich collages. This evening, she began with bells and a whistle suffused in thick reverb. Through this gentle sound, sharp electronic sounds pierced the darkness as she layered samples of her voice, manipulating the tone, pitch, and duration. Within the chirps, blips, and snippets the word "resist" appeared. Here, the word became a sound instead of a directive, something to percolate into the subconscious.

Ratkje's set was a series of continuous, connected movements. The diversity of styles was its real strength, giving the listener a chance to absorb, then let go, before the next movement began. The word 'resist' was soon sublimated by deep oscillating bass tones and the atmosphere grew dark and haunted. After reaching a breaking point, Ratjke took a sun-shaped mbiri and mixed it with a gentle folk melody. White noise and large monoliths of sound crept in slowly until they took over, scraping, sliding, pulsating, until surprisingly leading to another folk melody with the poignant refrain "it feels like were dying from mining for gold." Austere and alone on the stage, Ratkje left a lot of room for the imagination to fill in the surrounding space. I could 'feel' dark shapes slowly moving around the musician, a choreography in the mind to accompany the evolving soundtrack.


I'll begin this next section with an embarrassing confession. I ran into Heros are Gang Leaders co-leader and saxophonist James Brandon Lewis before the group's performance and, in a moment of profound buffoonery, asked dim-wittedly, "So, how will the set fit in with the resistance theme?". "Well," he slowly and perhaps too politely replied, "it's based on the poertry of Amiri Baraka ..." Yes, I should have thought about that a little more.

"Heros are Gang Leaders", in the outdoor amphitheater, was a sprawling affair. The group consisted of a front line of five singers and violist, and lined up behind, six musicians on piano, guitar, bass, drums, sax, trumpet and synth (see below for the full line up). The focal point however was poet, MC, lead actor, and main instigator Thomas Sayers Ellis. Throughout the night, in between songs, Ellis introduced the audience to the late poet and activist Amiri Baraka (who had performed at Jazz em Agosto in 2000 and 2001). Baraka, from Newark, NJ (and whose son is now the mayor) published his first poem in 1963 in a poetry journal under his original name Leroy Jones. The poem was the beginning of his rejection of the status quo and search for a more just society. Late in the set, after telling this, the band played one of their most straightforward tunes with the refrain "Leroy, Leroy from Newark hill / if capitalism don't kill me, then racism will."

Through the sometimes chaotic, and often dramatic, delivery of a mashup and re-imagining of Baraka's words, pure musical moments magically manifested. The second song of the evening was called "Amina", named after Baraka's wife (who not so long ago released her own album of spoken word and song). It began with a duet between Lewis and viola player Melanie Dyer, evocatively exchanging lines made from classical, folk and free-jazz, while a low rumble from Luke Stewart's bass gave it a foundation. This was followed then by some dramatic flair leading into a back-beat groove with the repeated line "hope isn't up to collusion", which intentional or not, was stinging set of words at the moment. Another moment was pianist and vocalist Jenna Camille's seemingly improvised rendering of Baraka's poetry. The free flowing melody and gentle waves of piano was a soothing moment, and a moment to process the surrounding intensity.

This is complex material to turn into song, and requires the audience to have some knowledge of what is behind the words. I think I caught about 50% of what was being said and could rely on some cultural understanding, but I wondered how the poetry and lyrics would go over with non-native English speakers, which I found out soon thereafter, was a little tough. So, perhaps a little more band, and little less vocal? The messages could still come across strongly and the band seemed like it could use a bit more of the spotlight.

To tie this back to last nights performance by Marc Ribot, both groups are drawing inspiration from the past and contextualizing it for ongoing and new struggles of today. Ribot from the folk and protest tradition, Heros are Gang Leaders from the ideas and words of Baraka. Regardless of source, connecting, remembering, and drawing strength from previous generations is essential for resistance, as one of the most potent tools of the abusers of power is painting a picture of a fictional and friction-less past as the model for the future, and there is nothing good that comes from living in the past.

This was exactly how I felt about Heroes Are Gang Leaders when I saw them at the Vision Fest. As a non-native speaker I understood maybe 10 percent of what the lyrics were about, which was really frustrating.
Interestingly enough, Luke Stewart, the bass player, will perform at the A'Larmé! festival tonight with Irreversible Entanglements.