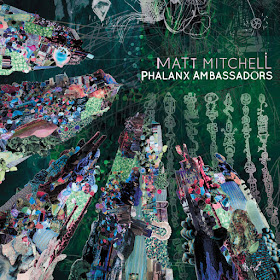 I have listened to Phalanx Ambassadors, the latest from pianist Matt Mitchell, an absurd number of times for an album that’s only been out a few months. Featuring a newly recorded quintet—with guitarist Miles Okazaki, Patricia Brennan on vibes and marimba, Kim Cass on bass, and Kate Gentile on drums—Phalanx Ambassadors promises a lot from the get-go, and more than lives up to that promise.

Mitchell's vibrancy and dexterity remind me often of Don Pullen, who also displayed a thrilling and restless creative spirit. Ahead of the album’s release, he made a few enticing remarks on social media that prompted me to reach out for, well, something not exactly an interview or conversation, but we did exchange emails, where he gamely provided some extra-textual commentary. Rather than share it here in a standard Q&A format—which is not how it flows, anyway—I wanted to interpose some of Mitchell’s responses alongside my thoughts about the album.

When we started emailing, I had just seen Mitchell on tour with Okazaki and his Trickster band. As readers likely know, these are two impossibly talented and warm players. Kim Cass and Patricia Brennan both played on Mitchell’s previous album, A Pouting Grimace, and many of us really enjoyed Gentile’s debut, Mannequins, which Mitchell played on. As a quintet or sextet, they’ve all played together for a few years, occasionally as the rhythm-section-only Phalanx Trio, and collectively their connections extend backward for years. That’s critical to hearing the album, I think, as it flows brilliantly from track to track. Additionally, the album was produced by David Torn, who gives the album its particular brightness.

As a follow-up to A Pouting Grimace, I was already hyped to hear what the album sounded like, when Mitchell tweeted: “If A Pouting Grimace was more of a ‘recording project’, this is a band dissecting material, w studio spices… More ‘grooves’, overall aggression and drive, also more tonally skirting diatonic-ish realms, relatively speaking. Some overt ‘melodicism’.” I had seen the cover art, and (incorrectly, it turned out) assumed the two albums might share some sensibility, aside from the name on the cover.


Phalanx and Pouting aren’t related, other than the fact that they share the same composer and bandleader. I actually finished all the music for Phalanx before I even thought of Pouting in its most embryonic stages. I composed the Phalanx music between 2011–summer 2014 off and on, first gig in 2016. The initial single-bar seed of Pouting was composed in the fall of 2013 on an Amtrak train, and the bulk of the Pouting album was composed during a couple days in November 2014 and mostly January 2017.

So the projects are temporally distinct from each other in terms of when my mind was dealing with them. I waited to record the Phalanx music until December 2018, mostly because the music is the most demanding to play of all the music of mine I’ve attempted to date, technically, rhythmically, in terms of the individual parts and as far as the band as a whole is concerned.

That tweet I did describes the material of the compositions—the piece “stretch goal” was the first piece composed, and all the other pieces are derived from it. Actually, all the tunes had the working title of “stretch goal” 1, 2, 3, etc, for a long time.

While the music totally has lots of the musical characteristics of my other work, both recorded and not-yet-recorded, I see these pieces as containing more overt relationships to “tonality” in the pitch sense, and rhythmically there is a good amount of material relying on rhythmic cycles that result in grooves of a more “grooving” sort than earlier things I’ve done. Obviously there are points where the rhythm and the harmony go further out at times, but I feel like a sort of balance is maintained.

On the album, you can definitely hear how demanding the music would be, especially over the course of several close listens, but that belies how much fun the music is. Opener, and seed piece, “stretch goal” bursts with something like a thrash-funk undercurrent to its jazzier upper waters. Here, Gentile uses cymbals much like Tyshawn Sorey or Marcus Gilmore, filling out the percussion layer with a tonally rich mix. And again, Torn’s production does a wonderful job directing listeners’ attention.

The richness of the band and studio come to the fore in “phasic haze ramps,” where melodies and various motifs and references circle and recur, interposed with some excellent improvisation, over the course of a 15-minute, somewhat loose composition. The result brought to mind førage, Mitchell’s amazing album-length cover/collage of Tim Berne’s music. The collage-type work happening on Phalanx is wildly different, however, with scraps of motifs and rhythmic concepts recurring from song to song in ways that really highlight the genealogy in Mitchell’s compositions. And throughout the album, Mitchell plays with voicing and echoes across multiple planes—not that the music is stratified, per se, but if the planes represent various tonal areas, ideas reach from one to another, bleeding between implied boundaries. As mentioned, there are already 3 chromatic instruments in the core group, but the liner notes mentioned both mellotron and Prophet 6, which literally amplify this effect:


There was a mellotron in the studio. I play it on “taut pry,” “zoom romp,” the very ends of “phasic haze ramps” and “ssgg,” and a little bit during my piano solo on “mind aortal cicatrix” as sort of a doppelgänger solo. And “be irreparable” is the track with the prophet. Roughly the second half of the tune has Prophet 6 improvising in the background, starting with one and expanding to 4 simultaneous solos.

Digging into the album more deeply, I had the feeling there were fewer, not more, guardrails in place, as far as the composition was concerned. That’s partly due to an inherent (though possibly not intentional) deception in the music, which is that improvisation and soloing is often one component of several composed areas, all simultaneously bouncing off each other. Following “stretch goal,” “taut pry” and “zoom romp” take this to the extreme, compressing the band into sub-2 minute compositions. As he does later on, “mind aortal cicatrix,” Mitchell adds mellotron on both tracks, which lightly shades in some fusion aspects of the music. But that more or less falls away once “phasic haze ramps” gets started. The lengthy centerpiece of the album, it’s one of several that got me thinking of Mitchell as a kind of Oulipian composer. (For those unfamiliar, Oulipo is a school of thought that imposing restrictions consequently frees a writer to produce more inventive and experimental work (see: Queneau, Perec, Matthews, Calvino).) But that’s not exactly what’s at play here, although my questions about this opened Mitchell up to talk about the genealogy of the Phalanx book:


Often, but not always, when I’m writing music I’m writing a group of pieces for a particular ensemble. The Phalanx music actually didn’t start off that way, but the 7 pieces are all definitely united by a few characteristics, and they have inter-relations: if “stretch goal” is the seed, “taut” and “zoom” are one branch, “ssgg” begins another one that spawns “phasic” in one direction, and “irreparable” is another branch off of “ssgg” which then further generated “cicatrix.”

[C]omposing music in almost any genre is sort of Oulipan by definition: there are constraints across all parameters, pitch, rhythm, form, etc., that sort of pre-define the world a nascent composition will inhabit. And in a sense, my approach to composing is pretty normal by the standards of some schools of composing thought of the past 50–100 years: wringing a lot out of a little, basically. Probably what makes my stuff a little different is that I choose unusual starting points, perhaps—like the single bar of music that spawned A Pouting Grimace. Essentially, though, when I compose I’m improvising very slowly using pencil and paper, with the freedom to deviate from the path or eschew things as I see fit.

That said, I’m definitely attracted to generative music, something pretty common in modern electronic music. But I always like taking such approaches and throwing wrenches in the works, and/or subjecting them to unconscious or inexplicable whims - sometimes in the composing process, but for sure with improvising, too, which is part of why I like to operate within the “jazz”/“post jazz” umbrella, or maybe more broadly, that of “American black music”—or at least see how all these things collide.