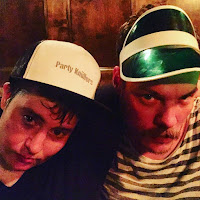 In light of the accolades that were heaped upon her debut disc from 2017, Fly or Die, it’s perhaps understandable that a lot of listeners would first be drawn to Jaimie Branch’s name when encountering this rather oddly-titled release. But those who’ve been following the Party Knüllers for the past few years know that the duo, comprised of cellist Fred Lonberg-Holm and drummer Ståle Liavik Solberg, are not about to be overshadowed by anyone. Defining themselves as an “experimental garage jazz duo,” they make a hellacious racket, as documented on some fairly obscure releases like their self-titled debut (Pieces of Coal Music, 2014) and Gold (Hispid, 2015). They’ve also teamed up previously with keyboardist Jim Baker, on the memorably titled Four Images of Wank (Hispid, 2014). Irreverent to the core, they certainly share Branch’s defiant modus operandi, making this meet-up, a live recording from the Casa Del Popolo in Montreal in 2018, an eminently reasonable one.

Those expecting Branch to revisit the groove-centric spirit found in abundance on Fly or Die will be disappointed; the Party Knüllers are determined to pursue the limits of sound and texture rather than lock onto a fixed pulse or melodic thread, and Branch is more than willing to fall right in line. Her crystalline upper-register flurries are occasionally in evidence, reminding one of her fearsome chops; but she’s just as likely to attack her instrument with a ferocity that is more noise-driven than tuneful. Even in those moments where she’s digging into repeated riffs, as on the opening track, “Hello, We Are the Party Knüllers and This is Jaimie Branch,” Lonberg-Holm’s tectonic assault on his instrument—dredging up massive, lumbering sounds that defy description—soon nudges, or rather pushes, her into much more abstract territory. And Solberg too is much less interested in sticking with a fixed rhythmic scheme, as he is much more amenable to using all manner of percussive techniques to attack, prod and provoke his counterparts.

Moments of tranquility do emerge, episodically—witness the remarkably restrained exchange between Lonberg-Holm and Branch toward the end of “Hello,” where something approaching a reverie threatens to take hold—as Branch does have a lyrical touch that can’t be suppressed completely. There’s even a hint of jazz that appears fleetingly toward the end of “Nailed Ace,” the second track, where Branch explores a motif that Lonberg-Holm gracefully supports with one of his rare pizzicato moments on the album. But for the most part, this is music on a mission to unsettle and disturb, and so one should approach it in that frame of mind, with a willingness to let the trio find its comfort zone in the realm of the uncomfortable.

If there is one thing the album has in common with Fly or Die, it’s the exceedingly short run-time of just over 30 minutes. With two lengthy improvisations of almost 15 minutes each and a much shorter one added to the end, it’s tempting to call this an EP rather than a full-length release; some listeners might take that into account before buying it. But in any case, it’s another worthy entry in the Party Knüllers’ catalogue, and something that should tide over Branch’s fans until her next big project.

Live at the Casa is available digitally on Bandcamp.