This year, Lisbon’s Jazz em Agosto will be celebrating jazz as protest music, free jazz as “Resistance,” the Gulbenkian Foundation opening its beautiful grounds to yet another festival of jazz otherness—music of vision and revolution. It will be testing the music’s meanings and boundaries as few major festivals do, and it will be welcoming the music with a special graciousness, as it’s been presenting musicians like Sun Ra and Cecil Taylor since its inception in 1984.

My own focus here is on the musicians of Lisbon itself (two of those discussed below‒drummer Gabriel Ferrandini and pianist Rodrigo Pinheiro‒will be appearing at this year’s festival) and the special spirit that prevails there, one of celebration but also protest, at once an art of self-declaration and community. There’s a special insistence in the city’s (and country’s) relationship to free jazz. In 1971, when discontent was beginning to make cracks in the longstanding dictatorship, there was a jazz festival in Cascais, a beach town just west of Lisbon, where among the members of a George Wein jazz tour was the Ornette Coleman Quartet with Charlie Haden. Haden got to play his “Song for Che” and dedicated it to the revolutionary movements then erupting in Portugal’s African colonies. The audience exploded in assent, while the police promptly arrested Haden, holding him, interrogating him, until his departure could be arranged.

It was a signal event and one that resonates in the energy evident today. My own awareness of free jazz in Portugal began with a particularly fortuitous invitation to the 2004 Jazz em Agosto festival. Among the introductions, I met Pedro Costa, then three years into the Clean Feed label project. It was, for any number of reasons, near the beginning of a real eruption in Portuguese free jazz and improvised music, and the label has played a central role. Today Clean Feed may be the most prolific free jazz label in the world, with releases on it and its partner-label Shhpuma rapidly approaching 600 releases (bizarrely, the only label that I’m sure has been as active in the same period is also Lisbon-based and dates from 2001: Ernesto Rodrigues’ Creative Sources which just passed 600). These five, stylistically diverse CDs, all 2019 releases, represent the label’s frequently excellent documentation of the Lisbon free jazz milieu. 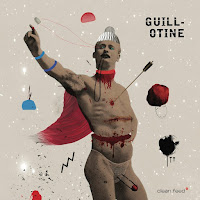 Guitarist Luís Lopes may have the broadest stylistic range of any of the Portuguese improvisers, including acoustic and noise solos; subtle free improvisations with the trio Garden; and international bands running from hard-edged, rhythmic ferocity to free play. He has also assembled Lisbon Free Unit (LFU), a nine-member band that may create its own category and which includes most of the Lisbon-resident musicians discussed here.

Lopes has written a few thorny themes for the trio Guillotine (a nominal relation of Thumbscrew and Spanish Donkey), a band that combines free jazz suppleness with heavy-duty amplified crunch. It includes French cellist, Valentin Ceccaldi, covering bass, noise and guitar/cello methodologies and functions, and Norwegian drummer Andreas Wildhagen, who is capable of remarkable lightness and a steady supply of dense explosions and near-random accents. In fact, when the trio turns down the amps for the concluding “Orgasmic Dance” it’s simply free jazz of the first order with slightly unusual instrumentation. The bulk of the CD is devoted to a three-part suite consisting of Lopes’ “Guillotine (Prologue) Triptych” and “Guillotine (Epilogue ) Diptych” bracketing a middle movement , “Marie Antoinette,” composed by Ceccaldi. After opening with a long, slow, gentle cymbal solo the full band arrives: brutally loud, hard-edged, and with a methodology that’s both ferocious and precise, harkening back to the creative edges of early fusion, like LifeTime. The wondrously transgressive cover, its own revolution, is by Travassos, designer of the vast majority of Clean Feed covers, curator of the Shhpuma label and distinguished electronic musician, with Lopes a member of the international quartet Big Bold Back Bone. 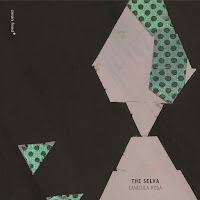 The Selva (the name denotes a dense equatorial forest) is a trio of cellist Ricardo Jacinto (member of the Garden and LFU mentioned above), bassist Gonçalo Almeida (Rotterdam-based member of Lama and The Attic) and drummer Nuno Morão (a frequent member of Ernesto Rodrigues’ large ensembles). The improvising group, which released its eponymous first CD in 2016, has a formal imagination so strong that some tracks sound through-composed. “Manimal Cerúleo” begins with a bass ostinato that’s eventually picked up by bowed cello and drums, maintaining its absolute insistence as it gradually simplifies to an electric pulse. No one is more devoted to the group’s strong rhythmic focus than Jacinto, who stretches a plucked modal solo across the insistently rolling drums and bowed bass of Tiki Prussia,” and he can stand out in a city that has as many distinguished improvising cellists (among them Miguel Mira, Fred Lonberg-Holm and Ulrich Mitzlaff) as it has guitarists. He accomplishes the same powerful surges on “Urdi Verboso,” bowing dense drones and a spray of harmonics across the surging bass and drums. Given the cello lead, one almost expects European classical references (even with a kora-suggestive jazz tradition reaching back at least to Sam Jones, if not Oscar Pettiford), but this takes on lyrical hues only when it’s travelling impulse reaches the overtly Japanese style cues of “Japa Titanium” or the Chinoiserie of “Mel Anil.” 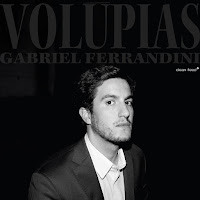 Drummer Gabriel Ferrandini is a member of Lisbon’s two internationally established groups, Red Trio with pianist Rodrigo Pinheiro and bassist Hernâni Faustino, and tenor saxophonist Rodrigo Amado’s Motion Trio with Miguel Mira. He has an incipient (as well as insouciant) genius for putting together bands: in 2018 he led the refined improvising ensemble I heard anywhere that year, a quartet with Evan Parker, Axel Dörner and Sten Sandell.

On Volúpias, he presents his compositions in a trio with the veteran Faustino and the young tenor saxophonist Pedro Sousa (partner to Ferrandini in a duo called “Peter Gabriel”). The tunes are sketches, repeating figures, some barely elaborated, the nine pieces named for the streets from his house to his studio to the ZDB art center where the works were first developed. The work is spare, quietly but intensely reflective, nothing and everything happens, at times a single drum stroke, a resonating bass tone or a vocalic tenor squawk speaking volumes. As the path advances, the music intensifies and expands; by the seventh track, “Travessa dos Fiéis de Deus,” the tension is tremendous, a force field suspended between the relaxed Faustino and Sousa’s broad but taut, choked sound. The final and extended “Rua da Barroca” gives free rein to the group’s potential interaction, a celebration of Ferrandini’s ever- shifting, richly detailed propulsive drumming as well as Sousa’s blossoming gift for timbral mutation. This CD is utterly different, a series of improvised duets between Ferrandini and Russian alto saxophonist Ilia Belorukov recorded in Saint Petersburg. The spare format provides the perfect view of Ferrandini’s rapidly evolving drumming. On his earliest recordings a decade ago, like the eponymous debut of Motion Trio, Ferrandini’s fundamental style seemed rooted in the playing of Elvin Jones with elements of Latin drumming. While some of that remains, he has grown remarkably.  There are elements of the Latin sound store still there (sounding like it might always have been sourced to Milford Graves), but the rapid flurries amongst very high-pitched drums and various metal percussion bring him much further into the broader, more open and detailed language of European free jazz drumming, suggesting among others, the work of Paul Lytton and Paul Lovens.

The continuous dialogue is at a very high level, but even given that, certain passages stand out. The third of the five tracks, “Fragmented Matter,” achieves tremendous movement, Belorukov emitting rapid, truncated wisps of high-pitched sound that in concert with Ferrandini’s comparable percussive activity suggest the movement of atomic particles. Brilliant interactivity is common here, but it again achieves a peak on the concluding “Two Notes,” this time Ferrandini achieving it with loose, low-pitched drums that oscillate in time. 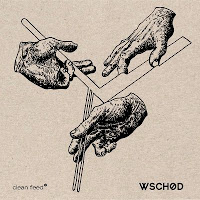 Wschód presents another member of Red Trio in Eastern Europe, pianist Rodrigo Pinheiro, recording in Wroclaw with bassist Zbigniew Kozera and drummer Kuba Suchar. “Wschód” is a Polish word denoting the East and sunrise and connoting beginnings. The name was inspired by a walk through Wroclaw’s "Park Wschodni,” and it’s further commemorated in the opening track, “East Park,” while every track title suggests something that might be found in its capacious grounds: “Reedbird,” “Gleam,” “White Grass” and “Silent Frogs.” Add that to Suchar’s inspired cover drawing in which a “Y” is formed of drumstick, piano key and bass strings with hands attached, and you have the necessary keys to both the band’s approach and its achievement.

It’s a highly kinetic group with the kind of detailed interaction that makes a commentator’s separation of parts a kind of clumsy afterthought. Piano cluster, drum roll and bass throb follow one another as if they might issue from the same hand. The interaction achieves the ineffable grace of the natural world, the density of foliage, the shock of colour on the wing, the rise and fall of compound and isolated sounds, whether burble or crack. As when embracing the natural world, the wonders are commensurate with the attention given. Among many free pianists, there’s a certain tendency to bombast, a trait which Pinheiro happily lacks. On portions of “White Grass” his focus is sufficiently devoted to the upper register as to suggest a toy piano, leaving the entire lower and middle registers free to his partners. The group’s collective voice rises through the rolling modal tremolos of “Gleam,” while the high whistling tones that conclude “Silent Frogs” link metal percussion, piano strings and bass harmonics. It’s a trio that one wishes continued opportunities.
Paul on Thursday, August 01, 2019
Share