About mid-way through AMM's second set of the evening at Berlin's Exploratorium, my mind wandered to the street that I lived on in central N.J. for thirteen years. When I moved in, the street was lush with majestic oaks and maples. Then, over the years, the large shade trees began disappearing. Some because of age, some from freak climate change storms, some from when the utility company repeatedly and mercilessly hacked at them, and finally, many more as a good number of idiot homeowners with no sense took them down. 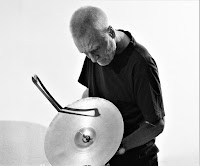 So, as the AMM slowly unfolded their musical tapestry, I thought about how at first when the big shade trees dwindled, the secondary layer of trees in people's yards became more vibrant ... ornamentals and evergreens appeared that I hadn't noticed before. That, I thought, was a little like AMM. The trio of drummer Eddie Prévost, pianist John Tilbury, and electronics Keith Rowe are quiet. They are not making big bold statements, rather the beauty is in the smaller gestures - refined dashes of tonal color, gentle swoops of electronics, and percussive splashes - filling the space where one may expect something larger.

I had been looking forward to this show. The second event within a year where the Exploratorium presented a legendary British band. It was nearly a year ago when the People Band performed a memorable show. Tonight's should prove to be as well. The first set was quiet - starting with Tilbury rubbing at the piano's keyboard cover and Prévost supplying a gentle response. At times it was so quiet that a bottle cap dropping in the audience was almost as loud (no, it wasn't me). At the pause between sets, some audience members were restless, but the second set set everything right. Rowe's electronics played a bigger role, and at one point generated a drone that the others began sculpting around. (Rowe's gear is quite fascinating, as he has a small practice guitar neck attached to a Nintendo DS with custom software. I don't recall a laptop or too many other things with dials and knobs).

As the set progressed, Tilbury's expertly picked notes and pendular chords gave motion to the electronic buzz, while Prévost's precisely arranged fills and pulses provide other textures. It was almost like you couldn't hear the trees for the forest, but what you did was unexpectedly vibrant and filled the room with a unique and minimal beauty.

One clarification, while I thoroughly enjoyed the AMM show, the vanishing trees really make me sad.