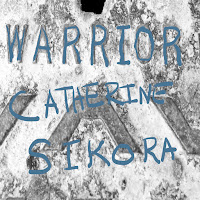 Regardless you like or not, reviewing a solo recording can be troubling even problematic some times. Any solo recording can be revealing very personal thoughts and ideas. Those that lie on the thin line that expresses the inexpressible. There are times that I feel I am the recipient of messages that oblige me to listen carefully and respond accordingly. Putting out anything of your own (and only that) self expression is, even in today’s social media driven society of spectacle, a strong message by itself. You have to, you really want to say something. And the only suitable way to do that is by leaving no other to mediate your message that yourself.

Catherine Sikora, with Warrior, has something to say to us. I haven’t met Catherine in person or had the luck to catch her live. I live in Greece you see. We only have exchanged some emails. Warrior seems like a part of her, as it resembles some of the thoughts Catherine shared with me on those emails about her music. Warrior is about women, dedicated to the struggles of all of them in our so called modernized societies. I would dare say, once more I guess, also for the lack of them in the world of improvised music.

But do not expect Warrior to be a protest album per se. It is mostly associated with feelings coming from deep inside. Or, possibly, on the disgust for the normalization of inequality in the 21st century. Sometimes Warrior delves deep into the free jazz tradition to form, on some of the tracks a cry, as angry as possible. In other parts of this almost 40 minutes recording, the love Sikora has for melody and the blues formulates a Braxtonian bridge between instant improvisation and written material.

The symbolism of the title alone-women as warriors-is polarizing our societies today because, as always, those who are most privileged (straight white males indeed) feel most threatened by it. I wouldn’t mind if Sikora used her sax the way A. Shepp did back in the day. As a weapon for the cry of his people to be heard. Sikora’s breathing, the melodic lines she uses, even the times she instantly changes a direction, follow a more symbolic, more internal path. Instead of the, always necessary if you ask me, raised fist, there’s a gesture of a hand that touches and holds another hand. An act of unity, power and togetherness. I find Sikora’s music, and Warrior of course, through this gesture.