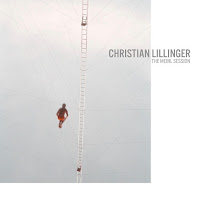 German drummer Christian Lillinger’s The Meinl Sessions is a 20-minute-EP based on a video shooting at the cymbal manufacturer Meinl in 2019, a company whose products Lillinger really likes. The session was produced over the course of two days: on the first day with a band and on the second in a solo setting. As a result, The Meinl Sessions is like a condensation of Lillinger's musical philosophy. The album consists of brief characteristic fragments, which display the way in which he uses structures, phrasing and articulation. The tracks are like small parts of a collage, in which ideas are only hinted at but if you consider the EP as one composition they make up a wonderful piece of art. Especially the seven "Settings", the solo tracks, are like samples which represent Lillinger’s compact language: beats, cymbal overtones, varied material applied to the instrument, complex and polyphone rhythms. He calls it "improvised beats containing several layers and countless ghost notes creating a sound behind the sound."

As interesting as the solo tracks are (which stand nicely alongside other recent solo drum albums, e.g. from Rudi Fischerlehner , Eli Keszler and Paal Nilssen-Love ), the tracks with the band are more exciting. “COR“ is a piece Lillinger also recorded with GRUND. But while GRUND is a band with seven musicians, the line-up here is reduced to drums, bass (Petter Eldh and Robert Landfermann) and synthesizer (Elias Stemeseder), which extrudes tighter, drum’n’bass-like characteristics from the composition and turns it into something which could be called weird fusion. “A.S.G.“ goes back to “Als Sozialist Geboren” from the first Amok Amor album (another Lillinger band) and again the track is full of changes and expansions, however - compared to the version of Amok Amor - it sounds like played behind a wall of fog. The saxophone (Otis Sandsjö) is more blurred, the basses are darker and more present. “Kali Koma“ is originally from Petter Eldh’s album Koma Saxo, but here it is less funky and more abstract leaving Otis Sandsjö more space for improvisation. The key track is “Plastic“, which is based on a highly complex melodic and rhythmic structure of several comprised bars. The track culminates in collective solos, through which the form gets stretched and expanded. Plasticity (or plastic) is one of Lillinger’s favourite terms representing his quest for the perfect sound.

The Meinl Sessions is a perfect introduction for beginners who want to explore Christian Lillinger’s music. It’s presents an excellent overview of his oeuvre so far because it highlights the most important ideas of his musical universe. And once you’re hooked, I promise you want to get deeper into this cosmos.

The Meinl Sessions is available as a CD and as an LP. The vinyl has been cut at half speed to prevent loss of treble frequencies.

You can buy it from the label: https://www.plaist-music.com/releases-1

You can listen to “Kali Koma“ here: