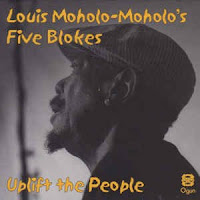 Louis Moholo-Moholo does not need an introduction here and still – here it is. Originally, from Cape Town he left South Africa with the racially mixed Blue Notes and finally settled in London. There he continued to play with the various bands around Chris McGregor, especially the Blue Notes and the Brotherhood of Breath. First prominence as leader was achieved with “Spirits Rejoice”, just rereleased as LP on Otoroku – a freejazz classic featuring the cream of British residing musicianship as Evan Parker, Kenny Wheeler, Keith Tippett, Johnny Dyani, Harry Miller and Nick Evans. He continues the tradition of the Blue Notes’ style of African melodies with free-jazz outburst until today, now with the extended name of Moholo-Moholo, which he took up after resettling back to South Africa in 2005.

This blog has featured some output of Moholo, most notably Duo-recordings with Marilyn Crispell (Sibanye – We are the one, Intakt 2008) and Wadada Leo Smith (Ancestors, TUM 2012 ). This CD rather follows the tradition of his Afro-Free recordings, which go back to recordings of the Blue Notes, e.g. the dedications to former members Mongezi (Feza, Ogun 1975), and Johnny (Dyani, Ogun 1987). Louis Moholos continued this tradition with his smaller band Viva-La-Black (Exile, Ogun 1990; Freedom Tour – Live in South Africa, Ogun 1994) and his Dedication Orchestra (Spirits Rejoice, Ogun 1992; Ixesha, Ogun 1994), and latest with his Unit For the Blue Notes (Ogun 2014).
“Five Blokes” features exactly what it states and offers a concert recording from London’s Café Oto from 2017. Five musicians who have all played together for a while. Alexander Hawkins provides rhythmic power piano with free excursion. John Edwards anchors the music with a solid bass. The two saxophones cry out the melody and scream with joy over it – Jason Yarde and Shabaka Hutchings. Everything is held together and irritated by Louis Moholo-Moholo on drums. The songs use powerful and rather simple melodies with an African feel to it introduced and sustained through unison playing, mostly by the horns. This background is used by all players taking opportunities to freak out. In this regard, the record is offering more free playing than some of the other younger records offer, e.g. For the Blue Notes. Moholo-Moholo himself provides a constant beat (without always playing it) and creates a rhythmic pulse sustaining an atmosphere of excitement.

This constant tension filled with joy is probably the most special feature of this music. I month ago I had the chance to catch the “Five Blokes” live (with Tobias Delius instead of Shabaka Hutchings) in Holland during the yearly Jazzcycle festival around Groningen ( Zomerjazzfietstour 2019 – a trip highly recommended for readers of this blog). The saxophones shout the joyful melodies, piano and bass provide a solid bass and change the roles with the saxophones while the leader on the drums succeeds in providing both stomps parallel to complex patterns reflecting joys of African pop songs and the history of free drumming. It is the latest release of Ogun records, the label that opened the ears of the world to this free-form African music since the 1970s. Highly recommended, available as CD and download .
Paul on Tuesday, October 15, 2019
Share