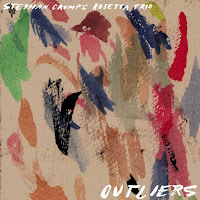 Stephan Crump will always be associated in my mind with guitarists. The first time I saw him play was with his Secret Keeper duet with Mary Halvorsen. Admittedly I was there primarily to see how she got those squiggly bendy notes that are part and parcel of her precociously trademark sound (as a non guitarist I still didn't have a clue how she did it but she made it look real easy) but while I was doing that was also thinking "that bass player guy is pretty good". So good that I subsequently went to see his Rhombal quartet and trio with Ingrid Laubrock and Cory Smythe; in all settings he added his unique musical personality while seamlessly fitting into the group sound to the point that seeing his name on a recording puts it at the top of the must listen to pile.

So if one guitar is good then two must be better, right? Because that's what you get with the Rosetta Trio featuring Liberty Ellman on acoustic guitar and Jamie Fox's electric, a group existing since 2004 which Crump formed as a one off to record material he felt strongly personally about for the Rosetta release under his name. But then the group assumed a life of its own and the guitarists began contributing works of their own and after Reclamation and Thwirl we have the current release.

If you're already enamored with the group there's plenty more to feast upon here. For those of you with an aversion to a drummerless trio of un firebreathing instruments, you might want to reconsider. The title piece, the core of which came to Crump in the back of a tour van in Europe, establishes the groove early after which the participants break away into slightly asymmetrical orbits which never escape the central gravity before finally getting back in sync. Synapse provides a scaled down arena rock feel of two guitars swirling around a propulsive bass figure, minus the drums and cacophonous volume.

When Stephan released Rhombal with a different quartet dedicated to his far too prematurely deceased brother, Patrick, it was accurately reviewed here as a joyous celebration of his life. Two songs were held back from that session specifically for this group. Dec 5 was Patrick's first birthday after his passing and the piece poignantly expresses the sense of yearning for what was lost, particularly in Fox's crystalline melodic notes. Middle March, the last time the brothers were together, is an uplifting tribute to his still vibrant spirit.

Liberty Ellman created Cryoseism, an intricate trading off of sprightly motifs by all three players, initially for Thwirl but the musicians weren't happy with how the piece had developed. Subsequent rehearsals and tours prodded and pushed it to a level they were satisfied with and here it is. That's how the entire disc is: well developed interplay between three simpatico players. Listening to it repeatedly as the weather was changing into cool autumn seemed very fitting.