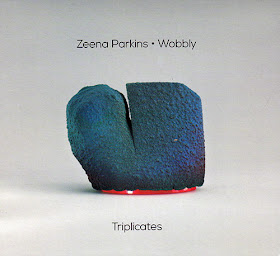 
Electric harpist Zeena Parkins joins Wobbly, on mobile phones & tablets, booper feedback oscillator, and mixer, for 9 tracks across 40 minutes on Triplicates. Wobbly’s perhaps best known for 2002’s Wild Why, an often humorous dadaist plunderphonic collage of radio clippings, sounding like turntablism to the nth degree. But for the past decade, with cheaper, better consumer hardware and software available, Wobbly’s leaned into live improvisation on phones and tablets, which he feels are now as responsive to the player as acoustic instruments. Wobbly’s sampled and acknowledged Parkins on his recordings throughout the past decade, but this might be the first time they’ve recorded together. His approach seems like a particularly fitting addition to Parkins’ collaborative roster, rich in other electric and electroacoustic innovators like Ikue Mori, Pauline Oliveros, Otomo Yoshihide, and Fred Frith, among others.

There’s a third player in the room. Listening devices designed to output sound similar to the inputs. Which is where the title, Triplicates , arises. There’s an acoustic source, the electronic output, and this machine that sings along (though it might miss the mark sometimes). Three copies of the same sound, but played through a game of telephone. Ideally, imagine a pluck of the instrument, a slightly delayed electric sounding, and then some response like the person who sings “happy birthday” a little too off-cadence or off-tune. It’s a humorous and interesting scenario that unfortunately falls flat in this recording because the acoustic soundings are completely obscured and the electric soundings are so manipulated that the interaction with and subversion of the listening devices is unapparent. It’s unclear if delay and reverb are just part of the many effects applied to Parkins’ harp, or if these are the listening devices. Though the obfuscation is part of the point, the questions of sonic origin and authenticity presented in this scenario would be better served with a clearer exhibition.

The recording is more satisfying sonically. Parkins’ harp assumes the personas of piano, inside-piano, arco, plucky prepared guitar a la Oval circa 2010, and bass a la Squarepusher. Probably much more, as the harp’s identity is warped by effects that swim in an environment of effects. Wobbly presumably builds the substrate with synths and drones on his tablets and phones but is most heard on the blooper, a feedback circuit that buzzes, sputters, vibrates, clicks, ticks like a kitchen-timer without a bell, and occasionally builds to squeals and whistles. The frenetic, wonky “Plankton Interregnum” - though very short at about a minute - demonstrates a kind of dismantled techno possible with this duo that might peak Autechre fans’ interest. It’s not all cold electronics though, and the piano-like chords reverberating on a humming drone on “Sing Themselves” and “De-storied” are particularly warm and emotive.

Ultimately it’s a solid recording from a both growthful and growing collaboration, from which I expect to and am excited to hear more. I only wish I could hear and recognize the inspired processes at play here.

Triplicates is a CD-only release.
Paul on Friday, October 11, 2019
Share