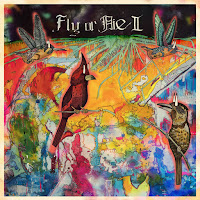 
Two years ago almost the entire modern jazz community agreed on the fact that trumpter Jaimie Branch's debut album was one of the best albums of the year . Released by the hip International Anthem label (which is also responsible for highly acclaimed albums by Makaya McCraven , Irreversible Entanglements , Damon Locks’ Black Monument Ensemble , Angel Bat Dawid , and Ben LaMar Gay), Fly or Die seemed to come out of nowhere, hardly anybody had it on their screen.

Fly Or Die II: Bird Dogs Of Paradise pulls all stops from the very beginning. After the opening title track the album’s central piece, “Prayer for Amerikkka Parts 1 & 2,“ begins as a sleepy, sloppy, classic 12-bar blues. Branch mumbles the title line several times (the vocals are the new element on the album). At the same time the theme of the album is set: it is explicitly political, and Branch is obviously mad about what’s happening in the USA. “We got a bunch of wide-eyed racists!“, she cries out, accompanied by the voices of Marvin Tate and Ben LaMar Gay. Her trumpet wails, moans and laments before a twelve-string guitar crawls out of nowhere, the groove begins to soar and the narrative takes us to the Mexican-American border. Branch tells the story of a teenage Central American girl who wants to immigrate to the United States. In the liner notes Branch tells the real story: the girl was separated from her family at the border and deported to El Salvador, where she was attacked and raped. Three years later, she seeked asylum in the U.S. once again, only to be incarcerated in Texas. “She was only 19, they crossed over at dawn,” Branch sings. “Now her mother and brothers are safe in Chicago and she’s all alone. (…) This is a warning, honey, they’re coming for you”, she yells. Simultaneously, the band plays a Latin groove, while Branch puts a Mariachi trumpet on top.

In the new line-up Lester St. Louis has replaced Tomeka Reid on cello, but Chad Taylor (drums, xylophone, mbira) and Jason Ajemian (bass percussion, vocals) are still part of the band. In addition to the first album Branch not only plays the trumpet but also sings and whistles, and she plays electronics and bells. Although her music can be clearly pigeonholed as jazz, she integrates a lot of other genres in her music as well: country, folk, blues, African grooves etc. Maybe her polystylistic approach was one of the reasons why some mainly conservative critics were looking for a fly in the ointment and criticized her technique. What they missed is the fact that we hear a trumpeter who has mastered her instrument and who is able to disregard sheer musical ability. Branch wants us to forget technique, it's only about the sound - and she says it at the height of her skill. Here she presents a real approach, which makes her music attractive for an alternative rock audience as well.

The album concludes with “Love Song“, again an ironic and angry statement about the situation of the US. “This one goes out to all the assholes and clowns / you know who you are” Branch repeats constantly aiming at selfish and ruthless politicians. She never mentions the name of the current President of the USA, but it’s obvious that he and his collaborators are meant.

Fly or Die II is completely influenced by the political climate and it displays everything that one might associate with it - desperation, anger, sarcasm, consternation, the call to resistance. It’s an outcry that rubs salt into the wounds of society, but also focuses on the grooving moments: Free your mind and your ass will follow (as Funkadelic put it).

“A Prayer for Amerikkka Parts 1 & 2“ is possibly the best jazz track in 2019 and Fly Or Die II: Bird Dogs Of Paradise would easily qualify as the best album - if there wasn’t Matana Roberts’s Coin Coin Chapter Four: Memphis (at least in my humble opinion). Nevertheless, you have to give kudos to Branch's musical achievement, because her new album is in no way inferior to its outstanding predecessor.

Fly Or Die II: Bird Dogs Of Paradise is available on vinyl, CD and as a download.