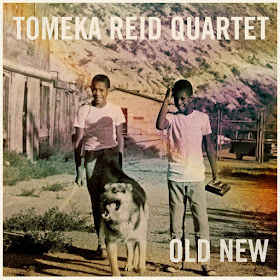 Listening to Old New, the latest release from the Tomeka Reid Quartet, one is struck by the band’s ability to improvise so seamlessly on one another. Reid’s compositions play with time, frequently alternating between straight-ahead, driving rhythms and rubato sections where Mary Halvorson’s guitar is able to float through a complex harmonic web of Reid’s cello and Jason Roebke’s bass. These compositions, and they are composed pieces, feel like extended experiments where each player is somehow aware of their collaborator’s next move on an elemental level. The intricacy and intimacy of the support each musician gives the next is felt through the entirety of the album. While both Reid and Halvorson are given ample room to experiment on their own, the beauty of Old New comes from their ability to coordinate and compliment one another. Moments of “Wabash Blues,” a piece somewhere between a Mingus swing tune and sound art exploration, showcase Reid and Halvorson’s playing as both a dual and a duet. This duality comes to define Old New, which like its title suggests, is concerned with the idea of being two (or more) things at once. New and old, soloist and accompanist, fighter and dancer, Reid’s quartet sways as one through the album’s many stylistic and rhythmic divergences. At once a tribute to hard-driving bop, second-line drum tradition, and electronic music, Old New emerges as a wonderful sublimation of these and other styles.

“Aug. 6,” the album’s fourth track, begins with multiple minutes of Reid producing sounds and harmonics on her cello while Tomas Fujiwara answers with snare drum patterns and cymbal splashes. Reid’s playing is mostly pizzicato here, with interludes where it sounds as if she’s slapping the cello with her bow. As the band falls into a rhythm, Halvorson’s guitar enters to pick up the melody twinned by Reid’s legato bowing. Periods of synchronicity allow the listener to better understand the divergent places each musician wants to take her instrument, as Halvorson breaks into a solo of plunging, shape-shifting bends and Reid returns to a pizzicato phrase in the cello’s upper register.

This is an album that revels in these kinds of stream-crossing moments, where the players come together in order to diverge. Old New is a project of bifurcations and a celebration of unity. It embraces tradition and charts new territories, often at the same time. Though each player does embark on various tonal and rhythmic excursions, the listener may be struck by the centeredness of Old New. This core, built by the quartet’s locked-in performance, is able to achieve musical totality while attending to the minuscule tonal investigations of Reid and Halvorson.