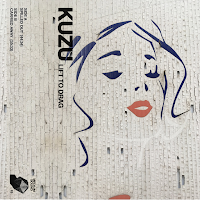 When two atomic nuclei fuse, it is often accompanied by the release of huge amounts of energy. The result can be both beautiful and violent, like the fusion that occurs at the center of our own Sun. I think Kuzu was formed with similar results. The Tashi Dorji-Tyler Damon axis has alone proven to be one of the more earthshaking guitar/drum duos in recent years. It’s become clear that they have found a genuine camaraderie in one another, as any of their records will testify to. In the other corner, there is Dave Rempis - that indefatigable force of nature coming out of Chicago. He’s got a creative well, no, geyser that has resulted in high-volumes of seriously good music from a number of seriously good projects.

Dorji (guitar), Damon (drums and percussion) and Rempis (saxophones) joined forces in 2017 with brilliant results. Their debut, Hiljaisuus (Astral Spirits, 2018) was a very well-received ass-kicking that quickly became a favorite - rightfully voted third in the 2018 Happy New Ears polls. It was the gorgeously harsh intersection of incendiary free jazz and noise rock. Ironically, their initial meeting was supposed to be just a one-time ordeal. But, according to Damon in an interview , they knew they had something special after recording Hiljaisuus. A tour of Texas and the East Coast ensued in the fall of 2018, which brings us to Lift to Drag.

Taken from a performance at Hallwalls Contemporary Arts Center in Buffalo, Lift to Drag consists of 80-minutes of improvisation at its finest. The two extended tracks leave ample room for this trio to seize rhythmic or melodic ideas, construct wild grooves from it, only to burn it down in strident anarchy. It’s a glorious process to witness. The first track, “Spilled Out,” begins ominously with Damon malleting out a steady rhythm on toms. Rempis joins in on tenor, oozing melodic lines, while Dorji feels out a similar path playing single-note runs with an eastern flair. The whole thing begins to boil in a captivating Persian-like groove until it erupts into a maelstrom of overdriven guitar and thrashing toms, crescendoing at around the 13-minute mark. Damon is going nuts, provoking the tethered animal that is Dorji’s snarling guitar, while Rempis screams and bellows. Oh, the raw emotion! Dorji utilizes feedback and distortion to engulf any remaining silence that might escape Damon’s impenetrable wall. Other times, Dorji’s picking becomes metered and percussive - letting hollow, metallic notes ring out to create a drone. A great example of this occurs around 19:20, when Dorji plays a droning bass under a Geiger counter picking pattern. Damon, a masterful purveyor of groove, lays down a satisfying swing while Rempis sings a vibrato-laden melody in a fashion reminiscent of Elvin and Trane.

Rempis switches to baritone, and the group begins the second set, titled “Carried Away,” in hushed tones. After a couple of minutes of quieter ruminations, Rempis cuts loose a battle cry that opens to gates to mayhem. One thing I can’t help but notice is how Dorji seems to offer more melodic material on Lift to Drag than he does in Hiljaisuus, in addition to the rhythmic, percussive and textural elements. It’s another facet of his playing that helps drive the mood at any given time, and also makes him a good sparring partner for Rempis’s melodicism. A great example of this takes form around the 12-minute mark. Rempis (on alto now) and Dorji mutually agree on a tonal palette. Rempis’s playing, with a warm and articulated tone, is simply gorgeous and unforgiving all at once. Dorji introduces a slow, staggering bass melody that perfectly compliments Rempis’s lines while contrasting Damon’s triumphant and tumultuous thundering. Damon is thirsty for blood though, and drives the piece to a breaking point until he drops out, leaving Rempis and Dorji to wander through the ruins and ashes. It takes some rebuilding, quiet at first, even becoming a bit ecstatic. But dynamics shift often with this group, and I often forget where the hell we even came from because the present is so engrossing.

I’m not going to lie, I would feel pretty betrayed if Kuzu were actually a one-time ordeal. They’re that good. And it’s clear that the magic they first experienced on Hiljaisuus is the real deal because Lift to Drag really cleans up. If you’re even slightly intrigued what a cutting-edge, hard-driving trio should sound like, then pick up both of their records now.