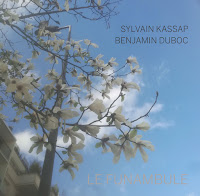 One of the many unfortunate consequences of the shuttering of the Improvised Beings and Ayler* labels is the loss of two champions of bassist Benjamin Duboc’s music. A third champion—Dark Tree Records—soldiers on, and it’s wonderful to see Duboc’s name again on their latest release. Duboc is a perennial favorite, but reedist Sylvain Kassap is new to me. He’s been an accomplished player and composer in improvised and contemporary music since the late 1970s, and on Le Funambule he sports an assured and fluid voice on clarinet and bass clarinet.

Duboc’s sonorous arco and Kassap’s almost translucent clarinet tone share much in sonic character, and on the opening track “Vers le Bleu,” Kassap gradually lures Duboc out of shadowy murmurs and into more melodic territory. Eventually they arrive exactly where the track’s title suggests: winding a course through more modern sounds toward a remarkable reading of the blues. It sets the benchmark for an improvised performance that extends beyond sympathy into empathy—even telepathy. Moment to moment, both players mirror moods, colors, and emotions with an elastic responsiveness that suggests a single musical mind. They race up and down the peaks and valleys of “C’est Narcisse Qui Danse,” and trace the serpentine coils of the long “Le Ventre de Socrate” until Duboc finally stumbles into a brisk line that Kassap absolutely revels in. It’s organic, lyrical, consistently engaging music.

In sharing a title with Genet’s “The Tightrope Walker” there’s both an obvious metaphor for the act of improvising and a subtler resonance with Genet’s ideas about an artist performing for his own image of himself as an artist (“Curious project: to dream himself, to make this dream perceptible that will become a dream once again, in other heads!”). The improviser may fleetly walk that line between self-indulgence and selfless offering, but here, if Duboc and Kassap’s performance is for themselves, then we’re lucky to be able to eavesdrop.