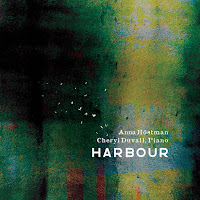 Anna Höstman (compositions) and Cheryl Duvall (piano) are two key members of Canada’s new music scene that was so wonderfully though necessarily incompletely documented in Another Timbre’s Canadian Composer’s Series. Unsurprisingly, this album could have fit seamlessly into that catalog. (NB: Höstman did received an honorable mention in the liner notes to that series.)
Harbour is an album of sparse and pensively meandering solo piano. Pieces tend to fall in and out of sprightly sprigs of melody and distorted tempos that convey a deep longing. And, as much as parallels can be drawn with the usual new music pantheon, these compositions invariably the billowy sometimes nervous romantic piano-landscapes of Leo Ornstein, as well. Take, the first track, the eponymous “Harbour (2015). This piece is particularly dynamic as it mixes dramatic overtones with stilted rhythms, and a dreamy whirlwind of scales over spins atop a grounding of overlapping resonances. Unique and beautiful in its own right, this music resides somewhere between “Suicide on an Airplane” and “Morning in the Woods” in its restive and melancholic melodicism, even if it is more pared down. Other tracks tread a similar line between hypnotic simplicity and slowly billowing loops on the one hand and jagged, brooding melodic cascades on the other.

In Harbour, Höstman and Duvall have produced an absolutely compelling album. It is patient and deliberate, eerily emotive. It is winsome, but dissonant. And as much as it reminds me of Ornstein in its flourishes, it is hardly derivative. Or, rather, it derives inspiration from numerous corners of the classical avant-garde and refracts them into something both rooted and contemporary. The result resembles a sleepy harbor at dusk. A few ships slowly drift in and out of view. The viewer’s mind wanders, half-disconsolately, half-ponderously, as his eyes fix upon seemingly arbitrary, but somehow alluring points along the horizon. The waves lap gently ashore. And then the wind picks up briefly and introduces new colors and sounds and temperatures that settle seamlessly into the environs, now slightly, and only slightly, transformed.