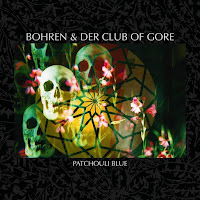 Imagine you are at the edge of the world listening to a radio program you don’t know. The radio DJ puts on Patchouli Blue without announcing the band. Within a split second you’ll immediately know that you’re listening to a Bohren & Der Club Of Gore album. The band has developed a really distinctive and unmistakable signature sound like - say - Keith Jarrett, B.B. King, Peter Brötzmann and Chet Baker. Some people call this Doom (or Dark) Ambient Jazz.

Almost six years have passed since their latest release Piano Nights, even for a band that considers slowness as a key element of their artistic approach this is a relatively long break. Every now and then during their more than 25-year-long career the trio of Morten Gass (organ, fender rhodes, baritone guitar, piano), Christoph Clöser (piano, saxes, vibraphone), and Robin Rodenberg (double bass) has surprised us, e.g. on Geisterfaust (Wonder, 2005) when they omitted Clöser’s saxophone or on their mini album Beileid (PIAS, 2011) when they integrated Mike Patton’s vocals on their version of Warlock’s “Catch My Heart“. Basically, once they reach a certain level, they try to maintain it without repeating themselves, which is a difficult thing to do. In the excellent press release to the album Ulrich Kriest explains how they manage to do this: “The solution is attitude and means work. Work in the studio. Perseverance. (…) Working on subtleties. precision. Careful arranging.“

Indeed, Patchouli Blue actually does come up with some changes. First of all, the cover of the new album is amazingly colourful, it reminds me of a Baroque still life. Then there are eleven tracks, more than any album before. Moreover, there’s a title track for the first time. Finally, they elaborate unusual aspects in their compositions. The opener “Total Falsch“ starts with an Angelo-Badalamenti-guitar - before an organ simply kills you, and the saxophone then directs you to a Twin Peaks moment, in which an encounter with special agent Dale Cooper seems very possible. Never before have there been such clear jazz references as in “Sollen es doch alle wissen“ or in “Deine Kusine“, highlighted by an acoustic piano, a double bass and a vibraphone. Or, right after that, “Vergessen & Vorbei“, which sounds like an instrumental Tindersticks ballad with its rhythm machine and analog synthesizer.

But in general Bohren have remained Bohren. Their music is still sublimely slow, which is why it can unfold its full beauty. The band continues building complex, dense atmospheres and moods around their noir jazz fundament, their sonic portraits leave room for the listener’s mind to fill in the gaps. The slightly altered nuances contribute to the expansion of a still unheard sound cosmos, in which stylistic will, defiance, deceleration and stamina have their firm place. Unique!

Patchouli Blue is available on double vinyl and as a CD.