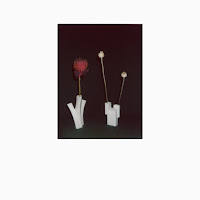 Félicia Atkinson is a multifaceted French artist who I have just recently discovered last year with the release of her collaborative album with Jefre Cantu-Ledesma, titled Limpid as the Solitudes. That album quickly warranted many listens and became one of my favorite musical experiences of 2018. This year Atkinson returns on Shelter Press with a solo release that spans seventy minutes. Without looking deeply into the context of this album, there are some influences that stand out. The cover displays the Japanese art of arranging flowers known as Ikebana, and I believe there is no other visual depiction to more accurately describe the music on this album. Using human constructs and designs to represent the natural world in a different, but just as delightful manner. This introspective record is a product of Atkinson's more recent experiences, and one of her outlets used to connect to the natural world around her. The influences on her music aren't direct or derivative, in fact they're almost hidden. Morphed, underlying, and abstracted; they are presented through Atkinson's own personal perception. And the result is always as beautiful and natural as the source material.

Many different techniques are applied in the making of this album, with a prominent one being Atkinson's ASMR whispering. While ASMR has become more popular during recent years, Atkinson's application of this unique sensation never appears to be kitschy or tacky. The ASMR is not overdone, and in fact adds to the sometimes disorienting and intimate atmosphere that this album provides. This is mostly due to the variety of vocals that Atkinson implements into her soundscapes. For example, the muddled fluid speaking on "Shirley to Shirley" comes in pulsating waves that are reminiscent of the tides. While on the subsequent track, "Un Ovale Vert", there is much more space for the vocals to open up, as chimes indicate the presence of a soft breeze, with delicate vibrations surrounding you. The smallest sounds come echoing back, supplying an entrancing experience that requires your full attention. The song "You Have to Have Eyes" is the best example of this immersion and serves as a very profound listening adventure. The intense buzzing drone contrasted with the slowly pouring poetry creates a moment that transcends time; you can live in this space.

"Linguistics of Atoms" is a stark and bleak break in the album, taking you right to the gateway of "Lush" and "Joan" which draws you into a dense, forested world where life is found everywhere. Behind this, some brooding and contemplative keys are sure to warn the listener of a darker unknown lying hidden in the shadows. "Open / Ouvre" and "L'Enfant et le Poulpe" are more curious explorations with tones and note placement, as well as the close-to-the-ear whispers. And while perhaps both of these tracks are explorations concerning some of the same aspects, they are not much alike. Sometimes it may seem that certain sounds are misplaced or obtrusive, but deeper repeated listens can show you the contrasts and complements which these sounds hold, and their more sublime presentation compared to previous songs on the album. The closer, "Des Pierres" is the only track recorded in an actual studio setting as Atkinson creates an alien surrounding while Sunn O))) guitarist Stephen O'Malley shapes crushing drones that have the ability to move mountains. At twenty minutes long, "Des Pierres" is a monolith of a piece while never in the slightest appearing to be repetitive or drawn out. In many ways, it is a summary and bookend of this project and the mindset behind it. Implementing many of the techniques prior, to create art that is vital and lasting. Throughout this album I listened to the words being spoken, the poetry that is so personally orated, but kept getting caught on one word here and there. It is a difficult to task, trying to mentally transcribe it all but perhaps the beauty lies in its mystery. From here I can only guess where Atkinson will go next, but I have no doubt that it will be a product of her creativity and educated understanding of the oneness that encompasses our underappreciated planet. The Flower and the Vessel is not limited in how it may impact you, this project touches upon more than just the sense of hearing. A whole spectrum of sensations is available to explore, and it's surreal to know that we have such easy access to it all.