As a fan of Don Cherry, I have always been fascinated by the trumpeter's openness to engage with musicians with totally different backgrounds and approaches: from Hassan Hakmoun over Lou Reed to Krzysztof Penderecki and Terry Riley, and of course all the real jazz configurations he played in. And that was one of his strengths: to be open to influences, to find new synergies and musical possibilities. That not every endeavour can be called succesful should not be a surprise, and - at least to me - the big disappointment was his collaboration with John Appleton on the album "Human Music" (1970). Despite its name, Appleton gave me the impression to "dehumanise" Cherry's music, and reducing it to bleeps and peeps and squeaks. Or even worse, the sounds Appleton produced were non-music, dead, machine sounds. The only positive aspect about the album is that an effort was made to try and reconcile man and machine in a musical environment, even if unsuccessful.

British trumpeter Tom Arthurs takes up the challenge. He is fascinated by music in all its diversity, and he holds a PhD in music from the University of Edinburgh, for which he conducted an Ethnography of Improvised Music in Berlin, in which electronics is apparently much more abundant than what I had imagined.

Last year, Arthurs released "Cahier De Petits Coquillages Vol. IV-V", in collaboration with the electronics and multimedia artist Alberto Novello. As much as I like Arthurs' playing on this album, as much as I dislike Novello's sounds. I try to listen to the trumpet without noticing the electronics and it sounds beautiful. The question is whether it would have sounded beautiful without the interaction of the electronics. That is a question nobody can answer. I have listened to this album several times, but it requires real effort on my part, and it starts irritating quite fast. Novello's sound is an acquired taste.

Arthurs luckily keeps expanding his universe, including turning his former duo "Vaucanson's Muse" with Isambard Khroustaliov (aka Sam Britton) on electronics, to a trio with drummer Julian Sartorius. 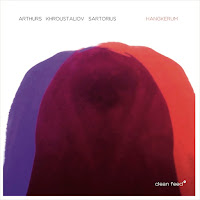 Interestingly enough, the interaction with the electronics on this album proves to be a success, and that is possibly due to two factors. First, Khroustaliov is a really subtle musician. He is not the in-your-face bleeps-peeps&squeaks-manufacturer who shows off his software and electronic wizardry. No, his approach is that of a musician rather than of a techie, he understands music and sound art. His sounds add drama, contrast, emotion, surprise. Second, Sartorius is equally astonishing on percussion. Together with the electronics, he creates a wonderful backdrop of alien sounds. No two sounds are alike and very few of those sounds were ever created before."Being interested in fine-scaled variations, tension and release, mass and vibrancy, he creates projects like the 12-LP-box set «Beat Diary» (Everest Records, 2012), consisting of 365 beat tracks", says his bio, implicitly emphasising his unique and uncompromising passion to percussive creativity.  In a way, the album would even be interesting by just listening to the interaction between Khroustaliov and Sartorius.

Against the formidable sonic canvas created by these two hyper-specialists, Arthurs' trumpet navigates full of depth and sensitivity, challenged by the sounds, interacting with them, harmonising with them. Like his two partners on this album, Arthurs' technical skills are truly impressive: from crystal-clear pure tones to muddled multiphonics and beyond. What could have become a clash of egoes, a combat for front-stage, wonderfully results in a very mature and cohesive effort where the co-creation and the musical result dominate.

The pace is slow, measured, intense. Especially in the last track - "Reréaux" - the intensity is even more increased by the higher density, apparent chaos and sheer volume of the interaction.

It is unusual music, one in which I have to revisit my reluctance with electronics. In the right hands (minds?) and in the right company, they may benefit the overall sound and create an astonishing listening experience, as on this album.