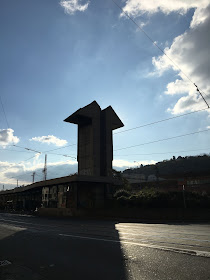 At the Western banks of the Vltava river the district of Smíchov stretches towards the South like a sea horse swimming in the direction of Plzeň. In its belly the road traffic and the rail traffic meet and form one vibrating rope. A bit under the navel of the fine creature, right between the motorway and the rail tracks, like in the fertile land between Euphrates and Tigris, the main building of our account is located: the MeetFactory. It is a huge light-green three-storey-railway-mansion , that looks a little shabby from the outside and has two melting red cars hanging from its facade – an installation by David Cerný, one of the founders of the MeetFactory (the name stands for the place as well as for the organization). The motorway, which flows into a tunnel a little south of the MeetFactory, sounds like a canalized waterfall; the rails, which by day and night lead the way for sooty suburban trains as well as for heavy freight trains dreaming deeply in the railway-rhythm, lie to the forefront of the building like a striped carpet one is not allowed to walk on. 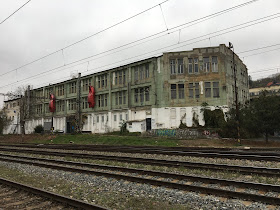 The arriving traveller gets off the tram vis-à-vis the MeetFactory. He was advised not to take the shortcut a.k.a. direct route over the fence and the rails but to follow the loop over the bridge, just ten minutes. Going uphill, changing slowly, the way is fringed with a rusty crash barrier and wild staghorn sumac trees growing out of the cracks in the bitumen that are absorbing one's look with a greyish shimmer. After crossing the bridge, on the other side of the tracks, more brownfield plants like blackthorns, acacias, wild roses with falling yellow-green leaves and red fruits are governing the side of the path. Rusty, suffering wagons and other machines – discharged due to their depression – are peeking through the autumn-colored brushwood. Magpies are impatiently throwing walnuts on the asphalt and from time to time a shaky student driver practices how to go backwards with the car. The sound of sirens is always around, emitted by yellow ambulances continuously racing over the bridge.

A little more than ten years ago the walls of the MeetFactory were empty and bare of everything valuable or useful. It was a structure of cement in a no man's land between motorway and rail tracks. After the first renovations the organizers started implementing their program of contemporary theatre, fine arts (including residencies) and music. The music, meanwhile, is mostly rock, metal and dance parties. At the beginning, the place was wild and raw but over the years its interior changed to a sort of industrial chique. The events take place in the main hall, which feels like any other rock stage. To its opposite there is the theatre hall, a smaller space. Its comforting and intimate density convinced your modest reporter immediately upon entering. The café in the bright and lofty foyer and the spacious gallery open at 1 pm and are freely accessible. Now and then young people come by, presumably from the residency programs; they converse in the art-pidgin-English that is so colorful in accents, they see the exhibitions, explain works of art of the exhibition and have a seat on the red chairs at the black tables in order to have one of the delicious coffees, and some, how bizarre, have red wine. If there is no concert or theatre piece in the evening, the place closes at 8 pm.

I owe my invitation to the festival and my accommodation in an apartment in the building annexed to the MeetFactory to Petr Vrba, one of the main curators of the festival. Two days before the festival we agreed upon meeting two tram stations north of the MeetFactory at the Smíchovské Nádraží, the southern regional train station and navel of the sea horse. The sky is a grey block under which reddish-brown buildings loom like gigantic meteorites, trams and buses prevail in the street. Petr proposed to get together in the train station pub Oaza, so I am waiting there. It has the generosity of a noble coffee house, a lot of space and light, few but large tables, wide industrial windows and a veritable feeling of journeying to the wide world, or at least to another country in its air. On the walls there are portraits of Ivan Martin Jirous, also known as Magor, the maniac. This former regular customer of Oaza published numerous volumes of poetry, he was an art historian and mastermind of the dissident rock group The Plastic People of the Universe. Because of his activities in the 1970s and 80s he went to prison for longer periods several times [1] .

The pub is legendary, Petr says, but the whole area around the train station is soon going to be torn down. It is the property of the Sekyra-Group, a developer-group, that is working steadily, also bureaucratically, on collecting all approvals and permissions to demolish the plot of land in order to plant high-price apartment buildings and shopping malls there, like they already did in other parts of Prague. Given this situation, last year, Michal Kindernay and Vedula Guhová made an installation with the sounds of the brownfields, the rails and voices of the residents of Smíchov, that may soon have to abandon the neighborhood.

The 45-year-old Petr Vrba is a musician, organizer and curator [2] . Over the last years he has worked for bigger and smaller festivals in Czech republic and organized concert series where he was responsible for the program. Before he became part of the Alternativa festival, he curated the vs. Interpretation festival in 2016 [3] . It helps a lot to be part of the scene, he says, when it comes to selecting musicians and/or bands for the program as well as for the communication. In consequence of his travels and direct contact with the world of musicians and improvisers, he knows much more than many sedentary/non-traveling organizers and he can count on with most musicians' basic trust in what he proposes, even if it seems a little bit unusual sometimes. Unlike the year before, Petr Vrba himself is going to perform this year on stage.

His colleague Roman Odjinud, around ten years younger, runs the (off)space Punctum where they continuously organize concerts, cinema, workshops, etc. On their website they characterize the venue as follows: "Punctum is a community project residing in Prague's Žižkov district. A home base for various creative and educational activities. Its purpose is to connect people from different subcultures and backgrounds in order to create new impulses for collaboration and communication. We work with non-profit organisations, students and other individuals that support the local alternative scene. The output being concerts, workshops, discussions, theatre performances, author's readings and yoga classes." The district of Žižkov ascends east of the centre and appears to be well-bourgeois and, as a matter of fact, is very beautiful. Changing uphill, going slowly, the Krásova leads to the television tower to which crawling babies are affixed, another art installation by David Cerný. To the punks from Punctum this is an incredibly unimportant fact. Cerný's reputation in the free scene is, to put it very carefully, not good. Keep on moving up the hill now, to the right hand there is the residential building Krásova number 27. If the front gate is closed, you ring at Punctum. You pass a corridor and arrive in the backyard where a staircase leads to a terrace at the level of a mezzanine. Passing one or two doors one enters the concert space which gives the impression of a rehearsal room for dancers without a mirror. The wooden boards on the floor are brushed in light green pastel and the high white walls are partly covered with black curtains. Another door leads to the kitchen/bar where they cook vegan food for the staff. On the ceiling someone painted: Petr Vrbas private free jazz club.

For 27 years the Alternativa has been organized as one of several events by the non-profit-organization Unijazz. The festival was very important in the 1990s, in the years after the Sametová revoluce, because the music that could be presented then was really alternative [4] . After some years, according to Vrba and Odjinud from their audience-point-of-view, the course of the program lead towards a "paying-the-debts-attitude", which means that many of the invited musicians, who had not been allowed to play in the Czech republic because of the political situation before the Velvet revolution, already had already passed their zenith and were musically not that interesting anymore. The Alternativa was developing towards being a festival for the older generation.

Roman Odjinud started working for Unijazz/Alternativa some years ago as a stagehand. After various other occupations he is now part of the curator team, together with Vrba. When they started working together two years ago, they formulated several objectives in order to bring a young audience to the festival and even more, to motivate them to taste more experimental forms of music. The most important aspects of their visions are:

[1] https://dissidenten.eu/laender/tschechien/biografien/ivan-martin-jirous/
[2] These "artist-organizers", to coin a term, are keeping alive experimental and improvised music, be it in Prague, Vienna, Mexico City, Sydney, Beirut and other parts of the world in between festivals.
[3] https://www.vsinterpretation.org/en/2016/program; November 23, 2019
[4] A list of all festival programs: http://alternativa-festival.cz/about-the-festival

Philipp Schmickl
Philipp Schmickl was born in Vienna and raised on the austro-hungarian border in Nickelsdorf. He had his first lessons in music, literature and politics at the Jazzgalerie Nickelsdorf. Later he studied anthropology and founded the series THEORAL – oral music histories and interesting interviews. The subtitle changed in the meantime to bright medium for uncynical voices. He fills his blog THEFUCKLE from time to time with festival reviews, poetry, field recordings and articles about music and love. At the moment he is looking for stipends to finance his PhD at the art university in Graz. The plan is to write a monography about the Konfrontationen festival in Nickelsdorf.
Paul on Saturday, February 01, 2020
Share