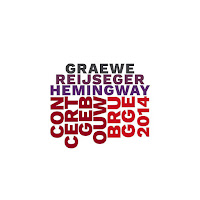 During a BBC interview, Evan Parker gave a typically lucid and insightful answer to the question "how do you improvise better with some people than others?" Paraphrasing he said that it's like having a conversation; some people are easier to talk with at length than others. In the liner notes of this release by the piano, cello and percussion trio celebrating 30 years of ongoing sporadic existence (10 releases plus one bootleg) while being recorded during a 25th anniversary tour, none of the three could put into words exactly what they do when they perform, but pianist Graewe came closest when he called it an onstage argument with elements of self defense and polyphony out of conflict. It's a very civilized argument over the three cuts, with no jarringly out of place interjections caused by not listening and reacting accordingly.

For those not having heard the prior releases of the trio, it's hard to find a more familiar touchstone entity with which to say "this is who they sound like". Because of Graewe's deceivingly elegant piano playing, it's tempting to say the Bill Evans Trio; but Reijseger's boisterous cello playing blows that comparison out of the water. So maybe the Clusone Trio, instrumentation aside, except that leaves out Hemingway switching to marimbas where he and Graewe weave sound tapestries in which to immerse the listener. So maybe The Necks, except these guys have much more distinct breaks from one musical section to another instead of a seamless imperceptible melding. Probably the Parker/Guy/Lytton trio comes closest except they have such distinctly different sounds when EP switches from Tenor to Soprano. Nope, they're their own unique melding of piano jazz trio and European modern chamber improvisation.

For those familiar with the group, who are hopefully not rolling their eyes too much at the prior paragraph, what is it about this recording of three conversations, Cadrage I - III, that merited holding them back five years for a commemorative initial release on the Listen! Foundation label? It was gorgeously recorded in an acoustically lively concert hall enabling the group to use space at low volume levels very effectively. Even in a trio of coequals the piano draws the lion's share of attention which brings the focus to Graewe, a player of prodigious technique who doesn't feel the need to display the full arsenal at every opportunity. On occasions he introduces probingly persistent, single note percussive lines - often in the higher registers- and, while his band mates react to that, quietly adds a swarm of notes with the other hand so subtly that the listener is enmeshed before being fully aware of it when the cello's augmentation. Add to that his ability to rapidly increase and decrease tempos and you have delicious tensions built in. The acoustics allow Reijseger to rub sounds out of the wood as well as bow some grating low volume notes, and Hemingway to scrape the drumheads and cymbals while adding to three more conversations of substance. Onward to forty!