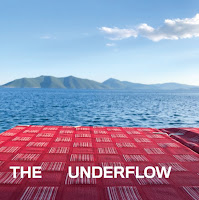 In early summer of 2019 a trio of jazz musicians who, although they had common collaborators and 2 of them had recorded together (Apertura and Off-Road), had never played together as a trio, came together in the Underflow record Shop and Art Gallery in Athens, Greece. Over 2 nights, they recorded a series of solos, duets and trios, making some sublime and some not-so-sublime sounds. The musicians were saxophone player Mats Gustafsson (The Thing, Fire! Orchestra), Trumpet player Rob Mazurek (Chicago Underground Duo, Desert Encrypts) and guitar player David Grubbs. The music they made was acoustic, electronic and atmospheric, in varying amounts. From gentle bell tinkling to grunting, grinding, full throttle bellows and bleats, what emerged was different and a revelation.

The expected happened - three musicians made wondrous sounds and also the unexpected - a solo from Mats, for example but this time on his first instrument, the flute. The trio gelled - really gelled and Underflow became a thing , a group, taking the name of the venue.

David Grubbs brings his fiery energy to the group, and with the grit and spirit of Mazurek's trumpet playing and the power and energy of Mats Gustafsson's saxophone playing the resulting music is intense, gritty and at times so absurdly off-kilter it somehow works even better than if they played in perfect harmony.

From delicacy of touches to terrifying unleashed power, the musicians each bring their distinct nuances to the group. Mats brings almost as much disruption to his electronics as he does to his reeds yet each parlance is so grounded in chordal lineage,it is difficult to decide exactly why some parts work as well, whilst other miss the mark.

From the off with 'City Stone Sleep', The Underflow primes the listener for a volatile and wide ranging sound-scape as electronics form a dense wall, over which engineering effects and sounds rise, verging on the edge of reason. Yet a second listen picks out false-voice and speech-like sounds interwoven into the electronica in the early parts of the track. The first half of the track, it has to be said, it difficult to get through but persist and emerge into the assuredly rhymed consequences. Real voice enters, brief but purposeful, a rhythm is set, the sounds enfold, circle the tempo before quashing it and Gustafsson's baritone sax explodes in brief, breathy woofs before the track builds, takes on increased energy, imbibes atmosphere over steady baritone and completely off the wall improvised trumpet. The final call and reply from sax and trumpet are wonderful.

'Goats and Hollers' is a track full of changes both in tempo and sounds. It also contains some of the most wonderful and completely unfettered vocalisation you could wish for - masterful, powerful, controlled and absolutely key to the effect of this track. The trumpet again is gorgeous, driving, challenging and the guitar fretful, hungry and mesmeric but it is the combination of all these things which create this track and as the vocals let loose, they seem to provide permission for the other instruments to follow suit. Incredible and completely engaging.

'Creep Mission', a David Grubbs composition, has guitar singing, in emergent harmonics over vociferous trumpet and wonderful whoopy electronics, the effect is crazily uplifting, particularly after the point where the guitar is worked into a short but ferocious frenzy, the echoed notes creating an almost solid back-scape for trumpet and later the baritone reeds to vibrate across.

'Not In A Hall Of Mirrors' is all about the air, the breath and the control of Gustafsson - this time on flute but it is the breaths which also add to the music, and the percussive touches of fingers on keys. A gem of a track and when the switch to sax is made the double tonguing is quite extraordinary, transferred across and pretty much as effective as on the flute. Latter interactions between guitar, trumpet and saxophone create a track which has a sense of emergence, development and finally a blossoming. Beautiful.

'I'll Try Anything Twice' is archetypical of three completely individual musicians creating a single track of music - there is a sense of competitiveness, at times a feeling of unity but mostly it is about the noise on this track and the fun of it. A lovely section magically occurs when the guitar sails out across the top before the sax simply picks up the volume and the guitar stops to allow it to flow. There is a beautiful empathy throughout this track and a quietness which lasts almost to the two thirds mark, after which the stut and flow, electronic rivulets and business of the track develops, belying the lack of volume in its intricacy.

This album is a revelation - it is new venture yet it somehow seems completely right for the musicians involved. The real joy of this music is partly the realism because every breath, holler, key flub and percussive sound is heard and felt by the listener. The process of creation is almost tangible. It fits right in with what I know of Gustafsson and his constant search for the discarding of tags, of labels and the freedom to simply create, to be in the music and work with sounds. He seems to have found two completely like-minded musicians in Grubbs and Mazurek and the huge attraction of this music is the partly self-absorbed way the musicians let go, the guitar proving clever, intuitive and yet very creative, the trumpet fizzing and crazily blazing its own path. But also the way the three musicians work together, creating opposite and also united patterns, walking the same path and then veering off on their own journey but ultimately coming together. This is not in any way confusing music. It is honest, open and clear. It is wonderfully OK and a taste of what is to come as this trio grow together.

Recorded by Manolis Aggelakis at Underflow Records and Art Gallery, Athens, Greece, on May 31, 2019. Mixed and mastered by Alex Inglizian, ESS Chicago summer 2019.