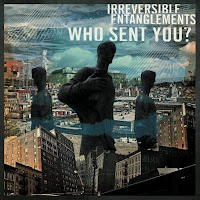 In yesterday’s review of the album by Scatter The Atoms That Remain I wondered whether free jazz had detached itself from social problems and whether it can still provide some kind of relevant function, or whether it was true that jazz has slowly come to a standstill. Projects like Irreversible Entanglements answer these questions in a clear way. Yes, free jazz has a relevant function these days and if the problems of African-Americans in today’s society are similar to the ones in the 1960s then it’s legitimate to use the music of that period. On the one hand the band brings back the Ornette Coleman Quartet - especially the music of Ornette! “No Más“ begins with a simple phrase of trumpet and alto, in which Keir Neuringer and Aquiles Navarro sometimes shift and sometimes play in unison, which calls up the spirits of Ornette Coleman and Don Cherry. On the other hand the band refers to the Sun Ra Arkestra’s When The Sun Comes Out and The Magic City on “Who Sent You - Ritual“. In doing this Irreversible Entanglements prove that they're operating within a context which extends a tradition.

“Stay on it“, don't give up: these are the first words of Camae Ayewa a.k.a. Moor Mother on the opening track. Tcheser Holmes’s drum style rides the cymbals hard, swings and lets the tom-toms roll only short but loud like blazing flames. Then a bluesy head is delivered by Neuringer (saxophones) and Navarro (trumpet). Their melody glows deep red in a minor key, bending and stretching time. The contrabass (Luke Stewart) stoically pulls through a groove, but breathes freely as well. Until again this clearly articulated voice declaims: “You can't save the night/ Here in America“. “The Code Noir - Anima“ is the name of the song, after the notorious legal text published under the reign of Louis XIV, which from 1685 to 1848 regulated the inhuman treatment of the slaves. Against the background of this text Moor Mother develops the following questions: How long will it take until the African-Americans have enough? How long will they stand being treated the way they have been treated for so long? When will they revolt? (“At what point do we stand up / at the breaking point / at the point of no return … At what point do we give a shit / do we stand up and say something“).

The whole album is a dream of salvation after racism, of afrofuturism, but it’s also about revealing the alienation in the US society (“at what point do we call each other “other“). It’s the most obvious reference to Sun Ra at this point, but this is only the experimental side of this tradition, the other one is Max Roach’s and Abbey Lincoln’s “Triptych: Prayer, Protest, Peace“ and Charles Mingus “Free Cell Block F, ’Tis Nazi USA“. Irreversible Entanglements might reach a younger audience and open their ears to free jazz (not only thanks to the fact that they’re an incredibly tight band) with their music because the determination of Ayewa's voice is also reminiscent of the Last Poets, especially at the end of “Who Sent You - Ritual“ and “Bread Out Of Stone“. Here the music is carried mainly by drums, bass and vocals and builds a bridge to hip-hop.

The band is an example of how the highest musicality and rage are not mutually exclusive, but rather fueling - at least on this level. The sovereignty of Ayewa/Moor Mother shows itself not only in the fact that she uses her poetry and her anger selectively. The repetitions and the psychedelic elements remind of gospel music (also in “Who Sent You - Ritual“). In her live performances Ayewa often uses a strong reverb on her vocals, which can be disturbing. Here everything is crystal clear, which supports the message even better. Free jazz hasn't sounded more accessible for a long time. I’m pretty sure that this album will end in my top ten list at the end of the year.

Who Sent You? is available on vinyl, as a CD and as a download.

You can listen to and buy it on Bandcamp: