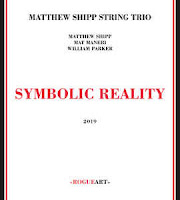 The latest Shipp offering comes in the unusual formation of piano and double strings, and somehow evokes an American music older than the 20th century New Orleans inception, whilst remaining utterly contemporary.

'Central Flame' bows open amongst spare chords, Parker repeatedly shifting between deep bowed bass and pizzicato momentum, providing a heavy counterbalance to Maneri’s taught, angular utterances. Shipp’s art is now so refined, his musical resources so fluid that even the sparsest of structures seethe with emotional content – pregnant with ambiguity – articulating concise insights from a well of dark inner narrative.

The title piece is predicated on Parker’s plucked contrabass counter rhythms, providing a relentless lurching exploration that both contradicts and compliments Shipp’s tightly controlled angular free fall. If opener 'Central Flame' demonstrates a method of alternating intent, 'Symbolic Reality' develops that into a fully-formed portrait of the Shipp String Trio, circa now; each musician’s personality deeply intertwined into the collective whole. There is something acutely visual about this piece – a constantly evolving Rorschach test: blood-deep hues permeating outwards; radial flame, insect wing and ink. The second half then transitions into a faster moving animal as Parker’s bass oscillates the core weight, whilst Shipp’s free-rhythmic playing flows.

'Flesh and Bone' begins with solo bass; sawn string and wooden percussion before becoming engulfed in the cascading piano tension. The spinal column of the piece is built upon Shipp’s continuously descending chords as the strings clamber, scratch, ratchet and splinter into the album’s most visceral territory – the mass of bass near overwhelming.

Next the LP diversifies – solo Shipp: recalibrating the internal idiom, highlighting his inner time sense; a metronomic, Tristano-like repetition of the one, underpinning an overflowing drama full of tension, unfurling like a Gothic folktale. A mature statement.

'The Other Universe' is all bark-shedding bass bowing interspliced with glass-cutting viola incisions. Chiming bells bring light to this sylvan space as the momentary string duo furrow deep – sans piano – into the constructed timbres.

In keeping with Shipp’s recent tradition of closing records with a ten minute-plus track, 'Law of Sequence' develops from a shadow dance that moves into undulating propulsive motion from Parker, before giving Maneri space to engrave his mark on the album’s final piece. The constantly developing flow of ideas rolls in a unison of increasingly intense intersecting voices, before slowing into a more mournful area, contemplating what has just been collectively created.

Arriving exactly twenty years after the last Shipp String Trio LP, Symbolic Reality fully demonstrates the progression and deepening of the collective. ‘Expansion, Power, Release’ (their second recording) feels positively song-form in comparison to the force of nature that grows out of the speakers, permutes and takes root here. It would be lazy to reduce this drum-less music to being somehow ‘chamber-like.’ There are compulsive forces at play here; like a fire that grows suddenly in intensity - consuming the very air around it.

Powerful, elemental – and at times – harrowingly profound music, that evolves and moves with an innately dark beauty.