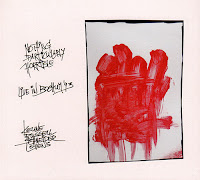 I have been writing in one form or another about improvised music of one form or another off and on for 56 years and one of the thing that keeps me coming back to the process is that I find myself knowing less and less about it every time I encounter it at one of its highest levels, such as the music that’s heard here, and that a knowing wholly nothing might ultimately arrive as the precondition for hearing whole, beatifically bereft of the intercession of language, thus a knowing nothing that seeks insistently to know less, to name less, to become unwriting. The longer I listen I question further the value of absolutes in any area of human or alien study or endeavour, wonder about such dubious concepts that might be applied such as “pure” or “absolute” or “original” or “form” or “something.”

Nothing Particularly Horrible may be as “pure” as improvising music gets, something I hope might indicate the clarity and immediacy of its relation to time, improvised music of this quality representing as immediate a representation of the relationship to time as we might experience. But that notion of “pure” might well be something else, “imitation” or “ruse” or some sinister effort to represent the idea of immediacy, a crafty imitation of presence, of the moment; that is, something as palpably false as an audio tape some 27 years old, its contents only an ideal representation of a fully occupied, otherwise inconceivable, 44 minutes in Bochum.

And yet this imitation of the moment is compelling, so subtle, so perfect. There’s a collection of sounds here, sounds that line up with the personnel described, sounds that can be attributed to Stefan Keune’s sopranino and tenor saxophones, John Russell’s acoustic guitar, Hans Schneider’s bass and Paul Lovens’ drum set, cymbals, gongs and musical saw (the latter, perhaps, an irrepressible companion to the Holy See, like Sancho Panza to Don Quixote). While much wood is present in those instruments, the dominant sound is metal—horn, strings, frets, gongs, cymbals; the dominant form the circle: the cylindrical bore of the saxophones; the cross-sections of guitar and bass strings, the arc of a guitar’s fret wire; the circular shells of drums and drum heads, gongs, the cross-sections of sticks. Movements in time include arcs, large and small, whether detailed and fragmentary or vast and imaginary (descriptors to be recombined and replaced at will), arcs that suggest infinities of both scale (macro and micro) and number, a universe of arcs that exist within and stretch outward from the music’s instants.

There is a sense of the continuous line here, but it’s a shared line, the musicians’ common pursuit. There are moments‒even whole minutes‒ when individuals only have to be listening intently, absolutely, and reacting instantly‒for sub-sections of seconds, just absolutely conscious enough‒to inventively continue the shard of another musician that must become a collective spontaneous arc, as if the four have met to inscribe a line that is a complete expression of itself. If there were only that line here, it might be enough, might suffice, but there’s much, much more. Sometimes the brief sounds accumulate, clamber over one another, perhaps seeking warmth and intimacy with that sound just over there; they become individually more complex, richer in overtones, in jolts and kinks, making sharp bends in their own arcs as they twist outward to other meanings, forcing different shapes of response, mimicking or prefiguring all the creative or merely self aggrandizing processes of biology, chemistry and physics.

It’s music for which one gives thanks, music that cannot even be repeated on our handy machines without first being lost, reconfigured, reinvented and born anew.

Stuart, I couldn't agree more. There's hardly any release I've listened to more often than this one. I was thinking about writing something about it myself, but the more I listened to the album, the more words were missing. I'm glad that you found some for it. You hit the nail on the head, especially with the first part. For fans of the music of the FMP label this album is an absolute must, it captures the spirit of European improv in the 1990s perfectly.

Thanks, Martin,there really is a special consciousness in that music.
However, I'm not sure I can really judge. As I went to send this, I
was asked to "Please prove you're not a robot," and I wasn't sure I
could or that it could be as easy as clicking that button.

A short addition:
If you want to order the album you can do that here (for Europeans):

For listeners from the US you can order it from:
http://www.downtownmusicgallery.com

Stuart, if someone can judge, it's you.
I'm always looking forward to reading your reviews.
We're not only contributors but also fans of this music.