Jacque Demierre is a Swiss pianist, composer, improviser, sound poet and musical theorist, is often considered as one of the most interesting and original personalities in the European free music scene. He has great knowledge of architecture and linguistics, but most of the time he is preoccupied with “the immediate experience of sound” and his attempts to “domesticate” the piano. He keeps perfecting his quest for a delicate balance between the act of real-time improvisation and the process of composition and often focuses on memory, constantly renewed and begun afresh. His latest releases highlight his idiosyncratic, radical tonal language that is as sensitive as it is eruptive, often taking on a noise-like qualities. 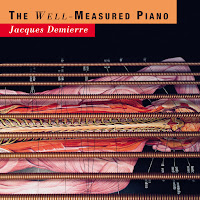 The Well Measured Piano is a perfect introduction for Demierre’s intense experience of confronting the piano as a whole, with its keyboard and its strings. Demierre often finds inspiration in architecture and sees his own engaging with the piano as “a work of measurement - that of the piano as a territory and of its different acoustic regions.” On this solo piano album he plays his own piano that he has owned since his early twenties, but in a new uniquely reverberating space - an old and empty bread oven with bright reflective walls and low arched ceiling in the town of Yverdon-les Bains. Stereo microphones were put at varying distances from the piano in order to capture the density and richness of the resonant sounds. Demierre later overdubbed the three pieces in order to intensify the dramatic elements.

The titles of the three extended and improvised pieces are inspired by poems of British Simon Cutts’ book Monotonie and demands careful listening, or as Demierre defines it: “listening involves tension, profound chaotic movements, and instability. But listening also allows one to organize the chaos of movements, to settle instability, and compose emotions.” He adds: “In the 21st century playing the piano is not just playing an instrument - it is penetrating a space, with all its well-aligned pavements but also its hidden facets, its zones of no laws, its propitiating wilderness.”

The first piece “Dilute the Sky with Care” demonstrates best Demierre’s physical, all-over-the-piano and his poetic manner of weaving and structuring together few parallel, dramatic and detailed narratives. All these themes sound untimely but totally belong to a distinct time, mood and space. “Wind Motet” charges the urgent, immediate creation of sounds with playful and sometimes even noisy, chaotic atmosphere, but also with fleeting lyrical undercurrents. The third piece “To Thank the Morning Rain” suggests a schizophrenic presence - at majestic, reserved melody competes with out-of-tune, nervous and resonant hammering of the piano keys.

Indeed, as Demierrre insists: “the sound experience is the only thing that counts". 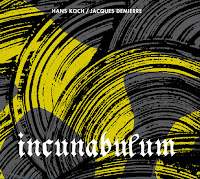 An incunable, or sometimes incunabulum, is a book, pamphlet, or broadside printed in Europe before the year 1501. Incunabulum is also the title of the first recorded duet of the two Swiss masters of free music - bass clarinet and soprano sax Hans Koch and Demierre,  who plays the spinet (a smaller version of harpsichord) in addition to the piano. The eight pieces were recorded over two days in May 2018 at Le Singh club in Basel, and all the titles are taken from the book I never knew what time it was (all begin with “But…”) by American poet and performance artist David Antin (1932-2016).
Koch and Demierre explore immediate, mysterious sonic terrains, never following linear, familiar routes and always eager to find out imaginative and adventurous sounds and demanding dynamics. But this approach does not mean that Koch and Demierre are focused only on chaotic and dissonant sounds or textures as on the aptly titled "But I Imagined Him Racing Madly Down the Beach to Dive into the Surf " suggests. On the minimalist and poetic “But We Weren’t Prepared to Enter the Game of Musical Houses”, Koch sounds like playing the Japanese shakuhachi flute, associated with Zen Buddhism, while Demierre adds a ritualistic pulse on the piano. “But I’ve Been Living Here for a Long Time” distils the exotic and delicate, Far-Eastern sounds ever deeper. “But This Was All Kind of New to Me” surprises with its lyrical and emotional spirit. Demierre turns his piano to a highly resonant percussion instrument on the last, poetic and ceremonial texture of “But You Know That Even Before You See the Pyramids, You’re Going to Take A Camel Ride”, complimented by Koch's distinct, extended breathing technique. 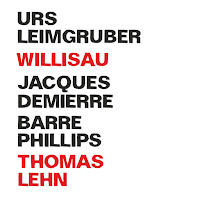 The free-improvising LDP trio of Swiss soprano and tenor sax player Urs Leimgruber, American, France-based double bass player Barre Phillips, and Demierre has been working together for almost twenty years and is one of the best in its field. Demierre describes this trio as “an incredible space of trust and experimentation”, whose motto is: “stop playing but don’t stop listening… Listening as a statement… Because we do not listen to something, we listen. We are in the act. We produce listening.” He adds that the LDP trio “works a great deal with accident, with fortuitous and spontaneous occurrence.”

For its performance at the 2017 edition of the Swiss Willisau Festival the trio teamed with another unique master of the music of the moment, German, Vienna-based analogue synthesizer player Thomas Lehn. Lehn has collaborated before with Demierre in his 6IX ensemble, and fits organically with the LDP trio's aesthetics.

Willisau features two extended improvisations titled “Monkeybusiness” 1 & 2. The first one is more loose, abstract and totally intuitive, stressing insightful, deep listening and immediate, natural flow of searching and shaping of fascinating sound realms, textures and dramatic, intense dynamics. The four musicians work individually but always listening with elephantine ears to what the others are brewing. Lehn becomes instantly an integral part of the fast, deep interplay, as if he was playing with the trio for many years. The second piece intensifies even more the dramatic dynamics but often references the distant sound universes of free jazz and sometimes even touches fleeting melodic veins, but, again, in a total free, democratic and quite subversive and ironic manner.

Willisau is another remarkable chapter in the history of the LDP trio. And Demierre observes: "without memory there is no improvisation. Each new concert [of the trio] is thus constructed from the memory of the last concert played…"

This bi-lingual book – in French and English – collects Demierre's insights, thoughts and perceptions about the “examination of my experience of sound,” from the point of view of him as a pianist, performer, composer, improviser and academic scholar with great knowledge about linguistics studies, modern architecture and poetry. Demierre writes that John Zorn conducted with him for Arcana VII: Musicians on Music (Hips Road/Tzadik) triggered an impulse for this book.

Besides the alphabetical, short chapters, some are quoted above, this book offers a bonus - a mini disc with an unpublished composition of Demierre for voice, “Ritournelle”, that reflects his profound interest in linguistics. This piece was performed by Demierre on March 2018 and brings to mind the Dadaist works of Dutch sound poet and vocal artist Jaap Blonk. “Each word is repeated- with a tempo of about 30 bpm- in a way to create horizontal acoustic matter that unfolds in a movement of consonant and vocalic morphing”.