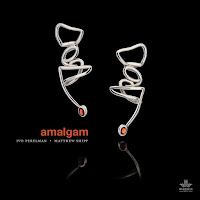 Ivo Perelman and Matt Shipp have made several recordings together and seem to have found, in each other's playing, approach to improvisation and delivery a musical dizygotic twin. The difference fate dispensed is one is a pianist, the other a saxophone player. Each has strong individual traits yet also that innate ability to listen intently and know the right moment to soar or step back. I have reviewed their music before and in fact, Ivo, I have reviewed with a number of different collaborators. Of this album, he told me, " we feel this is the most accomplished effort of the duo so far".

So, track number 1 (7) is breathy tenor over gentle chords from the piano , the tenor creating melodic, sensual lines which carry a song in many places, whilst the piano follows, using the phrases to intersperse chords and progressions aiming always towards the expected destination of the sax - which is not always where Perelman ends up. In places, Matt ship crashes keys, as if to impose a change and inject a note of insistence of his path, which Perelman accepts momentarily, before returning to his gentle meanderings and improvisations. Track 2 (13) begins with piano dark and deep, contrasted by Ivo's tenor , light and cheeky, under which the piano rumbles and rolls before joining in the tomfoolery with some playful lines of its own. Perelman then changes the atmosphere and timing with some sharp, driving, incisive notes, under which the piano offers contrapuntal rhythms aplenty, whilst remaining firmly in the lower octaves. Perelman then soars into altissimo before returning to lower register and creating some responsive stut notes and interruptions of his invention. The last section with both players bashing out notes is impressive improvising - and catch that cheeky little bar and a half of swing inserted from Shipp.

Track number 3 (8) is a conversation between sax and piano, with Perelman in squeaky but controlled altissimo over Shipp's chordal ingressions. On this track you can hear the quality of Perelman's extended altissimo notes- something he is a bit of a specialist in lately. He slurs and sweeps from lower to upper registers, swapping melodic lines for short phrases and the piano follows relentlessly. Track 4 (16) is faster, energetic, both Shipp and Perelman devouring notes and spitting them out seemingly in the hope they come to lie in a way that makes musical sense - and , because of good old intuition, they do. One glorious section of piano rumbling around the low notes under the sax creates a deeper, threatening tone, which unleashes itself as Perelman discovers more notes than any sax deserves in the middle range of his tenor. Track 5 (1) is shorter, with a darker undercurrent running through it . There is a sense, from the melodic lines from Perelman coupled with some equally tuneful phrases from the piano, that this track may have started out as something melodic and melancholic. It does not end that way. In one section a bit of swing almost breaks through, just under the melody but this is swamped as improvisation takes over and Perelman is led where the musical muse leads him. This is a stand-out track.

Track 6 (2) is high energy, short, sharp phrases from both saxophone and piano, with Perelman bashing out the stut notes in militaristic rhythms before switching to a gentle, softer line. A little angry squealing in altissimo over some devilish piano before relaxing into a softer, melodic section.

Track 7 (14) is more piano-led with Perelman responding to the piano lines and key suggestions - again indicative of that listening which happens with great improvisers. The piano is heads up on this track, its dark chords suggesting the changes and directing the rhythms more. In Shipp's solos, you can hear his rapid-fire single note progressions which somehow manage to keep each note crystalline.

Track 8 (17) sees Perelman exploring a musical phrase for the entire first third before dispensing with that and diverging into a place which attracted his attention earlier. The piano is steady and worth a listen as, in the second third it seems to explores a single phrase in different ways itself, whilst sax improvises across. By the final section both players are in tune with each other once more and the ending with piano floating under slurred sax is gorgeous. Track 9 (9) sees Perelman fast and furious over gentle, intricate piano, working his way towards a 7-note phrased section and some rather lovely reedy altissimo. The track has a light, effervescent feel to it, yet is incredibly intricate in both piano and sax lines.

Track 10 (15) begins with solo sax which sets up a journey which both musicians then embark on, sax gently melodic over equally gentle and pure sounding piano. Just after the three minute mark the piano sets up a rocking rhythm over which the sax speaks and squeaks, the altissimo sounding alarmingly like Mr Punch in a couple of places. Track 11 (6) is another fast-delivered , inventive flurry of phrases, motifs and little nuances, all briefly explored and delivered at breakneck speed. It is short, too short. Track 12 (11) is more melodic in structure , with the sax taking on a reflective stance and there are some great sections where both sax and piano are tremuling in tandem. Perelman lets the notes roll and spikes the sound by tonguing at regular intervals, whilst the piano sets up a steady , thudding rhythms , which the sax then picks up and then, suddenly, it finishes. Press play again.

Ivo said earlier he felt this was his and Matt's best music yet and, whilst that is debatable, purely on the basis of the choice now available (and some gems are there), their music is in essence like bubbles. Different shapes and sizes of sound float and pop to release the sounds within. Some are gentle droplets of sounds, subtle in colour and almost butterfly-like in their caress whilst others release a deluge of thick, heavy sounds, the colours dark and rich , the weight heavy on the ears. It all depends which bubbles you pop. There is in this release more emotion, especially from Perelman, than I have heard recently, which is engaging.

Whilst every track sounds different, there are threads linking them together. The central section has a melodic phrase, the final section includes a dialogue between the instruments and the outre is generally one musician on their own. So there is subtle pattern and structure in this improvisation and from the piano, an adhesion to an almost classical train of structure. What that means and why it makes this paring quite rarefied is that you have free improvisation yes, but there is also enough structure and a touch of rigidity, which the brain sub-consciously deciphers, fixes on and finds comfort in. Good music, good improvisation, everything to like.