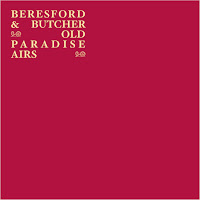 I don’t usually think that extraneous circumstances should intrude on a form as functional as a record review, but there’s something about the late days of March 2020 that are apt to condition almost any utterance, to the extent that almost anyone reading this, even, I suspect, at some temporal remove, will know exactly what I mean, at least in the broad general strokes of the Covid-19 crisis, as different as that experience will be for different people in different places. As we variously hunker down in relative isolation, almost anything will inevitably strike one slightly differently than it might have just a couple of months ago or will hence.

How strange, then, that one should listen to a CD recorded 10 months ago today, on May 29, 2019, that may be strangely perfect for the times, a work of the avant-garde that is literally work of an advance guard, work that embraces an historically radical means‒free improvisation‒and foreshadows a kind of radical nostalgia: from its recording location, Iklectik, at London’s Old Paradise Yards, to its playful titular celebration of that space‒imagine the nostalgia of “Airs” become a nostalgia for “air”‒to its rich red cover’s suggestion of a Victorian painted wall. Adam J. Bragg’s gatefold graphic further blurs feathers, fire and the liquid interaction of chemicals.

The titles of the pieces are more germane still: “Krotyl,” “Dreen,” “Swittle,” “Dirl,” “Marr,” and “Pikk.” They’re drawn from a book whose title will explain much: Honk, Conk and Squacket: Fabulous and Forgotten Sound-Words from a Vanished Age of Listening , by I.M Rawes. It arrives at a moment when “air” is both more specifically polluted than usual while being less generally polluted than is to be expected, based on a sudden shutdown of much industry and traffic. There’s something strangely utopian about fish visible in Venice canals, air pollution thinning over great cities or a rare sighting of people allowed to carry musical instruments on board half-empty planes.

The particular joy of this music resides in its invention and its relative quiet. There’s something about the pairing of a piano and a woodwind, perhaps a piano and anything, that suggests the traditional recital, though here Steve Beresford plays objects as well (sometimes in the piano) and electronics even more, and the music itself is insistently contemporary in the sense that little music belongs so intensely to the potential of the present moment. It is a trick of memory and cognition, a recital of an absolute present, achieved in part through that accelerated pace of Butcher’s special line, literally at something like the speed of mind. There are occasional convergences of identity here, with Butcher blurring into a personal zone of acoustic electronics, and there’s something nostalgic in the generous invocations of sounds from the natural world (which must include, too, the industrial and the natural processes of decay), like Beresford’s inspired random percussion suggesting environmental squeaks and drips and the near and confusing links between the two musicians’ sounds, like the ancient teletype and Morse code of Butcher’s sonic resource.

There’s an invention here so rich, that the episodes of the performance‒two longer “suites,” Dreen” and “Dirl” (at 18 and 14 minutes respectively) and four shorter pieces (from two to six minutes)‒move by with such quicksilver invention that their individual identities ultimately blur into a work so focussed and diverse that it becomes confusingly singular.

At a time when one looks for things to which one might return in the future with pleasure, this is a valuable event.