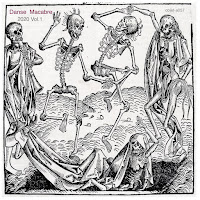 The Danse Macabre is the "dance of death", the Totentanz in German, and it originated in the European Middle Ages in the wake of the Black Death or the plague, which exterminated one third of the European population. The Danse Macabre typically depicts figures from all walks of life who are dead, dancing together on equal footing, waltzed to their graves by smiling skeletons. Whether king, pope, wealthy aristocrat or famous knight or normal commoner, everyone is vulnerable to the disease and death is the great equalizer.

The idea inspired Italian saxophonist and sound artist Gianni Gebbia to revive the concept in the context of the current corona virus pandemic. He invited - and invites - other musicians to accompany the current crisis with their music, and even if locked up in their homes, sound files can be shared and collaborations can ensue. Most musicians participating so far are from Italy (Gebbia himself, Gianni Mimmo, Gabrio Bevilacqua, Luca Collivasone, Francesco Cusa, Carmelo Graceffa, Giovanni Verga, Camillo Amalfi, Pierfrancesco Mucari) but Sebastien Vallaincourt from Canada and Nicolas Perrin from France also joined on the first Volume.

The performances are short, mostly duets and solo pieces, with telling titles such as "Covid-49 Fluted", "Plague Etude #1", "Freak Out Party" or "L'Ennui" (boredom).

Despite the variety of musicians, and their scope of music (from jazz over avant-garde to electronics),  the 'album' remains focused, with each track a terrifying testimony to what's happening in the outside world, explorative and expressive. This is primarily to Gebbia's credit, as the curator and producer of the initiative, and readers more familiar with his music in normal times, will easily recognise the sound artist's inventive spirit and boundary-breaking collages. It is not always easy listening. Some tracks require real effort to listen to (electronics is also not really 'my thing'), but considering the circumstances and the music's theme, the experience works well (compared to John Zorn's Kristallnacht for instance, this music can be listened to). Some pieces are even beautiful in their desolation, like the opening track or the piece by Gianni Mimmo.

It is music of pain, of distress, of uncertainty and random violence. It is music of loneliness and longing. It will resonate with many of us, it will also require to open our ears (and minds) a little bit more for the sounds we are usually not looking for. This by itself may have some artistic or even therapeutic effect.

Because all musicians are invited to participate, the second volume is already available, called Vol. 2. 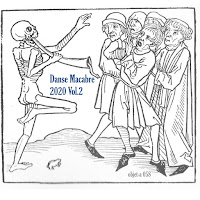 The newly joined musicians include Luc Houtkamp (Netherlands), a quartet with Michael Vlatkovich on trombone, Tom McNally on guitar, Scott Walton on basss and Garth Powell drums and percussion (US), and the band called the Putan Club (self-described as FeministElectronicIndustrial-AvantRockTechnoWorldSauvagerie).

As Gebbia writes: "Day by day during the isolation days when new pieces arrive they will be published and the price will augment according to the new pieces published. For the fans who already brought the album we will provide to send the musical updates trough codes in order to reward their initial appreciation of the project".

As you can expect, an album such as this one cannot be good throughout, there are ups and downs, and stylistic preferences will vary for each listener. Yet at the same time it is a unifying experience to hear all this variation created within the same theme.

Like everything in this unseen global pandemic, the crisis brings out the worst and the best in people. This initiative clearly ranks in the latter category. Joining musical creativity with the tools of technology, across borders and genres maybe gives a picture of the post-crisis world, where all things will be more collaborative, inspired and inventive, without death being needed to equalize all humans. 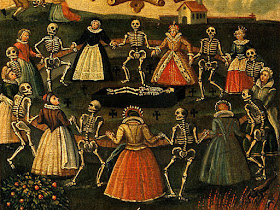