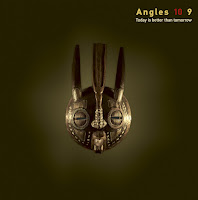 A vinyl and digital album, Today is Better than Tomorrow is a collection of two live sessions. The first, track one and side A, is performed by the tentet and was recorded at the International Jazz Festival Saalfelden in 2013. The second, both tracks on side b, were recorded by the nonet at Zomer Jazz Fiets Tour Groningen in 2018.

The pieces on this recording are not new in themselves. Today Is Better Than Tomorrow/In Our Midst, combines one of Angles’ “go to” anthems (Today is on both Epileptical West - Live in Coimbra (Angles 6) and By Way of Deception - Live in Ljubljana (Angles 8)) recorded in 2009 and 2013 respectively. The second half of this combo, In Our Midst, comes from the eponymous Angles 9 release from 2013. From side B, Ubabba was featured on the 2009 release Injuries (Angles 10). Love Flee Thy House (Breslau) was first captured on the Angles 9’s 2017 releaseDisappeared Behind the Sun. In other words, Today is Better than Tomorrow is something of a re-visitation of the last decade of the Angles’s evolving rotation.

Along with Mats Gustaffsson, Andreas Werliin, and Johan Berthling’s Fire!, the Martin Küchen-led Angles have become the international face of Scandinavian efforts to bring soulful fire music, kicking and screaming into the 21st century. (Werliin and Berthling, in fact, are party to both projects.) Today, however, is hardly just a nostalgic recapitulation of some admittedly stellar studio recordings. Compared to those, the music actually seems somewhat tamed, or maybe aged in the deepened, enological sense of the term. The “fire” rarely reaches too high, though the flame frequently burns a brilliant blue and flitter in fantastic patterns. Indeed, the spacious extended passages and the reconfiguration of recognized compositions and configurations make this release a beast of its own nature, something much greater than a “greatest hits live.”

When a live album like this works, it does so because it transforms the music. Familiar melodies appear out of a churning unfamiliar morass. Just listen to introduction to Today is Better than Tomorrow, which substitutes lamenting horns for the prolonged percussion and vibe invocation that introduces the Epileptical West version. Or, jump to the tempered transition bridging Today and In Our Midst, whose long and winding procession imbues this track with a new ritualistic potency.

Flip to side B and the listener is greeted by a spirited rendition of Ubabba. Werliin and Berthling and their compadres in the boiler room, Mattias Ståhl (vibraphone) and Alexander Zethson (piano), are in complete sympatico as they forge an infectious groove over which the horns bluster and moan. Especially compared to the first side, this piece is a big band extravaganza a la late Sun Ra Arkestra (RIP Danny Ra Thompson). As the fanfare subsides, Ubabba bleeds into a dirge-like introduction for Love Flee They House, which, at around three minutes, switches gears into a driving, salsa rhythm and horn flourish. The piece deviates into a few billowing horn solos, then falls back into the undulating funereal march, which drives the song forward until its final decrescendo.

Angles is an incredible project and Today is Better than Tomorrow is testament to that. However, I was equal parts excited and cautiously curious when I first came across this. On the one hand, I thought, “Another Angles album?!?! Sign me up.” On the other hand, I wondered whether another live album of compositions previously released and recorded live was really necessary (to the extent that “necessary” has meaning in the age of digital reproduction.) For those who already own the rest of the Angles catalogue but stop short of being completists, this is likely unessential. Some of the detours are surprising and the first side, in particular, moved me more than other recordings of those tracks separately had. Still, there is nothing shocking about the direction the band is travelling or the means it uses to get it there. Then again, this is straight up Angles caught on some pretty magical nights, and for that alone it is at least worth a listen. And, for those of you who are new to the group, harken: this is as fine an introduction as any.

Thanks for this review and highlighting the release. A Liberation Music Orchestra for our times and do we need that just now.