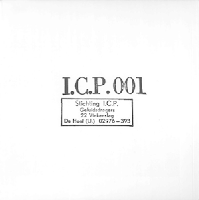 Towards the beginning and end of 1967 two ground-breaking albums were recorded, quite independently and continents apart, which established a configuration that has become a staple of free jazz. In February at the Van Gelder Recordings Studio, New Jersey, John Coltrane and Rashied Ali laid down a set of pieces for the duo of tenor saxophone and drums. The tapes sat in the vaults until they were issued by the Impulse! label in 1974 as Interstellar Space, a posthumous release that became one of Coltrane’s most influential recordings. Perhaps less well known is an album resulting from two sessions in the Felix Meritis building, Amsterdam in November and December 1967 by Han Bennink and Willem Breuker, released that year under the ironic title, New Acoustic Swing Duo. The albums differ yet both have a sense of fresh thinking using a jazz ensemble reduced to its minimum, reeds plus percussion exploring new kinds of relationship and old relations anew. Melody, texture and rhythm, the boundaries between tuned and untuned, notions of dialogue, solo and accompaniment, were rejigged and expanded in ways that have provided an impetus to this day.

Previously only available on CD as part of the massive Instant Composers Pool box set (ICP, 2012) this reissue has been remastered from the original tapes by Alex Inglizian at Experimental Sound Studio, Chicago. It was the first release on the ICP label, founded by pianist Misha Mengelberg, Bennink and Breuker as an outlet for music that would receive little interest from regular record companies. The home-made nature of the project was reflected in a batch of the original album covers, individually produced by Bennink using an assortment of drawings, stickers, feathers and anything else that came to hand, that rapidly became collector’s items, particularly in Japan, which might account for the pervasiveness of the sax and drums format in the burgeoning Japanese free jazz scene during the following years. The CD booklet reproduces three versions from that personalised edition taken from Mats Gustafsson’s gargantuan vinyl collection .

Neither Bennink nor Breuker were strangers to the recent advances in jazz and formed part of a group of North European musicians inspired by the work of the U.S. “new thing” and keen to develop their own, distinct dialects. Bennink had performed in Eric Dolphy’s penultimate recording session in 1964, both had played with Cecil Taylor during his visit to Holland in August 1967 and were to form part of Peter Brötzmann’s Octet ‎on the eruptive Machine Gun (‎BRÖ, 1968) the next year. What’s initially striking about the album is the novelty of sound and textural diversity. Coltrane and Ali played tenor (with occasional shaken bells) and a standard trap kit. Breuker switches between soprano, alto, and tenor saxophones, E-flat and bass clarinets, and Bennink deploys an array of percussion, listed on the back cover of the LP: bass drum (larger and more resonant than a standard kick drum), small and large tom toms, street parade drum, snare drum, tabla, banya, vibrapan, homemade rattles, cow and temple bells, Chinese 7-inch giant cymbals, scraper, Chinese temple blocks, hi-hat, iron and wooden sticks, and his voice. These additional percussive colours are used for contrast and embellishment as well as being integrated into a bespoke kit stretching the usual envelope of sounds, the boom and tizz enhanced by the acoustic of what sounds like a large room captured using a simple two microphone setup into a portable reel to reel recorder – basic but purist, though at times overloaded due to the wide dynamic range.

Like much of the new music during this period there’s a conscious effort to reach beyond Western practices and even reject the jazz legacy – for Europeans always a foreign tradition and one amongst many – in a bid to start from a place expunged of memory traces. There is something liberating in such a radical departure yet also a feeling of being cast adrift. In a number of respects this was the operation in jazz, a medium that had only recently been deemed worthy of serious attention, of tenets created during the birth of modernism in Paris a century earlier and which still held sway in the turbulent 1960s, what the art critic Robert Hughes considered the most durable aspects of the avant-garde from that time:

“…the sense of not having a fixed self, of being free to invent; and the idea of the artist as subversive. These combined to raise two chief themes of modernist self-awareness in art: disconnection and loss on one hand – the loss of a secure social past, of a parental tradition – but on the other hand, artistic self-emancipation.”

Navigating this new terrain took different and necessarily, very personal forms. Coltrane had an almost molecular understanding of motivic permutations, and the stars, to guide his tightly constructed, celestial ascents. Breuker is more earthbound, at times as if he’s forgotten how to play and is starting again, in flight from established rhetoric generally and coming to terms with the granular materiality of blown sounds and the harmonics, partials and tiny overtone particles he can produce in an archaeological excavation as concerned with what lies in the layers between as the notes themselves. He and Bennink seem to be reaching back to something more elemental from a time before recognised traditions. Even ‘Singing the Impalpable Blues’ with its tortured clarinet and churning drums sounds like a cross between a New Orleans funeral march and some ancient ritual. The longest track, ‘Gamut’, which occupied the whole of side 2 of the LP, is a mixture of gritty bursts and gnarled undulations having more in common with vocal articulations than saxophone techniques, fugitive melodies of no discernible origin, disconnected outbursts of clattering metal, wood and skin, and at its most intense moments cries and yells – the music of Neolithic stone circles whose significance is lost in runic obscurity. And there’s always the presence of Bennink’s unerring rhythmic facility and sensitivity to timbre, so refined that whatever he’s hitting it just sounds right, from the pitter patter of tabla to icy cymbal crashes.

The package contains a bonus CD of the duo in performance at Jazzclub Podium in Essen, Germany from early June 1968. This was recorded, with their consent, by a couple of enthusiasts using two stage microphones and is a transfer to mono made shortly thereafter (the whereabouts of the original stereo tape is unknown). Again, Breuker switches instruments between each of the improvisations which continue the textural explorations of the ICP album: filtered and modulated resonances, melodic shards, and Bennink’s tumbling polyrhythms, moving through pockets of high and low pressure. We get a chance to hear Breuker’s sinuous bass clarinet work at the close of each set.

As with Coltrane and Ali, there’s an awareness of heritage though more as a negative force – part political, part cultural, part aesthetic, with no obvious dividing lines – a combination of individual vision and the temper of the times. No doubt, there were, and still are, diverse motivations for this kind of free improvisation but possibly of more importance it represents something that was to remain essential, uniting thinking and making in music that is, by and large, about its own operational activities; the discovery of a new sonic understanding which paradoxically is more removed yet at the same time, in its unfettered directness, somehow more human.

Whereas Interstellar Space was made towards the end of Coltrane’s life and is a distillation of his late work, albeit one that suggests new territories, these performances can be seen as the beginning of a journey. Both Bennink and Breuker were to spread their wings further and reintroduce elements of the tradition, playing in and out, straight and fake, slicing and splicing in the Dadaesque collage that permeated much of Dutch improvisation in the years to come. You can hear their development on the only other album they made as a pair after years of playing apart, The New Acoustic Swing Duo in Japan 1984 (Jazz & Now) an occasionally manic parade of genre hopping appropriations and spirited free jazz.

This remastered edition of New Acoustic Swing Duo is also available as a download . 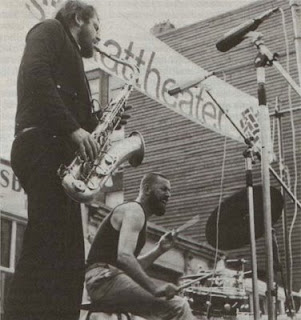 Excellent review of the music and the historic perspective. Oddly enough this used to be on Spotify along with lots of other ICP recordings until one day they just disappeared because the license expired or whatever (the same thing happened recently to some Howard Riley recordings about which I was *not* pleased). So kudos to Corbett vs. Dempsey for making this available along with some subsequent concert tracks. They did something similar with Rüdiger Carl's King Alcohol only they had an extra disc of additional tracks from the same studio session of comparable quality.

A truly engaging and insightful review, Colin. This is one of those albums that was on my radar, but that I never got around to purchasing. When there are so many contemporary releases in a type of music that is supposed to be progressive and new by nature, I thought, why dig so far back? Why add another old Bennink and Breuker recording to the collection? Or, rather, why add this specific one? In short, you've convinced me. Really looking forward to giving this one a listen.

All the expanded Corbett vs. Dempsey reissues (at least those i've put my hands on) are excellent, 100% worth purchasing. What is more to say about this magnificent duo that isn't in this review? Nothing really.