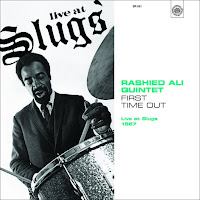 In Rashied Ali’s recording archive two 7' reels with boxes were found, actually the first recordings of the great drummer as a bandleader. They were made at a performance which took place at Slugs (or Slug’s Saloon), one of the well-known New York venues for contemporary jazz of the 1960s and early 1970s (the Jazz Gallery and the Five Spot were other famous ones). The club was located on Manhattan’s Lower East Side at 242 East Third Street between Avenues B and C, an area which was rather run down, contaminated with crime and dangerous at that time. Slugs also became sadly famous because Lee Morgan was fatally shot there by his wife.

According to the excellent liner notes, the gig was a last-minute booking, the band - Rashied Ali on drums, Ramon Morris on tenor saxophone, Dewey Johnson on trumpet, Stanley Cowell on piano and Reggie Johnson on bass - had probably never played together before and had to be put together under time pressure, there’s no evidence of another concert in this combination.

In the spring of 1967 Rashied Ali was still officially working with John Coltrane when he assembled this band. At that time he was one of free jazz’s most promising and energetic drummers, his playing was a swarm of sound, using timing as a blast-off. Within his loosely-structured compositions his bandmates could focus on other things. Stanley Cowell’s playing on this album is remarkably free and different from the mainstream jazz musician he was to become. Here he sounds like a mixture of Burton Greene, Dave Burrell and Paul Bley. Ramon Morris is the next surprise, he presents himself definitely influenced by Coltrane, which you might not have expected if you listen to his funky jazz-rock album Sweet Sister Funk, which was to release only six years later. Less surprising is the choice of Dewey and Reggie Johnson. The first one had played with John Coltrane on Ascension (Impulse!, 1965) as well as with Paul Bley on Barrage (ESP, 1965). The latter was already familiar with Slugs; he had worked there, alongside Ali and Cowell, across the previous two years. Later on he played with Marion Brown and Archie Shepp.

First Time Out: Live at Slugs 1967 presents four pieces between 22 and 15 minutes. At the center there are “Ballade“ and “Study for As-Salaam Alikum“, both compositions that were supposed to accompany Rashied Ali during his whole career. Of course, Coltrane influences can be found everywhere in the compositions. “Ballade“ starts with a tender melody but like on the other tracks on this album, the instruments quickly leave the given compositional paths and use them only as a rough guideline. Here Johnson delivers a sad solo delicately accompanied by the rhythm section. Rather melodic at the beginning, it soon becomes more and more angular. Morris’s saxophone takes over, and from the start it’s a very spiritual moaning, he plays long and winding lines sounding like a brash version of Coltrane on his Ballads album. Then the band is reduced more and more, first there is a blues-soaked little piano solo, before the focus is put on the bowed bass, which abstracts the given frame the farthest with reluctant lines and harmonics, only accompanied by scarce piano chords and brushed drums, until the whole composition almost comes to a standstill. Ali’s following drum solo “shows his penchant for a pluralistic stream of ideas, focused mainly on the drums themselves (snare, toms and bass drum) and less on the cymbals“, as the liner notes rightfully point out. “Study for As-Salaam Alikum“ has the same structure as “Ballade“, the theme is followed by a trumpet solo in which Johnson seems to just about squeeze the notes out of his horn. Morris’s following part is a highlight of the whole album, it’s an expressive breakout between Pharoah Sanders, Ayler and Trane. Over Ali’s rolls he uses the entire range of the instrument, he screams and shrieks and overblows in brittle, yet vibrato-ladden tones (there’s a similar passage in “Composition I“, in which he literally explodes in front of a swinging background). This seems to have inspired Cowell, whose fingers fly over the keys before they bundle the notes into heavy, oblique chords. The ending is left for another solo by Reggie Johnson. All the players came to burn, they crackled and glowed in the fire of Ali’s pieces.

If there’s a negative aspect to this recording, it’s the sound. Listening to the music one might speculate that the recorder was set near Ali’s drums, often both the piano and the bass can scarcely be made out, while drums and horns are fine. As a result, the quintet sometimes sounds like a duo, for example midway through “Composition 1“ and whenever the horns are present in “Composition II“. As soon as they drop out Cowell is able to present a spectacular solo and one would have loved to hear him more clearly before.

Nevertheless, this recording gives us a great impression of what live gigs at that time sounded like (just imagine you were sitting next the drums) - with all the turmoil and chaos from those turbulent times. It is a piece of contemporary East Village jazz history.

Coming back to where we started from, both Duo Exchange: Complete Sessions and First Time Out: Live At Slugs 1967 are far away from seclusion and whether they seduce musicians to retreat from innovative ideas just to sound like their heroes is at least speculative. Free Jazz and Improv don’t exhaust themselves in a manic escape into the archives. On the one hand there’s nothing wrong making excellent music easier accessible (in the case of Duo Exchange) and on the other hand why should one not add another piece to the mosaic of a great musician’s work that contributes to the understanding of his music? In his book Reynolds doesn’t provide a solution to the (interesting) questions he comes up with. However, imagine it was true that there was nothing radically new, what would that mean for the quality of today’s music? One might question if a radical new thing is even possible in days of post-post-modernism. Maybe we shouldn't wait for something new to appear out of nowhere, maybe we should watch out what happens at the micro and not at the macro level. In the meantime we can enjoy old recordings, reissues and even bands that have dedicated themselves to the sound of the old masters without having a guilty conscience. In this context both albums by Rashied Ali are highly recommended.

First Time Out: Live at Slugs 1967 is available as a two-LP set or as a digital download (although the digital version of this release contains only a portion of the material of the vinyl version). You can listen to it here:

You can also get it at http://www.downtownmusicgallery.com

If I might be allowed to quote one of my earlier reviews:

“For music which celebrates the fluidity of experience and the ephemeral, free music has proved surprisingly durable. In musical terms, few recordings sound dated (though some early examples are a little precious by modern standards) a sign that such music probably also marks the end of narrative history, the notion that musical development is goal-orientated, consisting of cycles of growth and decay with styles having identifiable aims, each representing an innovation, reaction against and progress from its predecessor. Such thinking is partly an inheritance of the Enlightenment and there’s a strong case that this has not been the position in other arts for at least fifty years. As Arthur C. Danto put it in respect of the options afforded by artistic pluralism: “When one direction is as good as another direction, there is no concept of direction any longer to apply.” There’s equal merit in regarding the history of free improvisation in similar terms. No doubt, as with most other activities improvisers tend to get better at what they do, but it’s more a matter of depth than direction. Development is by way of refinement and accretion, not revolutionary jolts, though this probably only become apparent after 1970, by which point the ground had been largely mapped out.”

So yes, I’m sceptical about there being anything anything radically new but I don’t see that as a problem. In my opinion the virtues of free jazz and improv lie elsewhere than in a notion of radicalism which although it had some relevance during the early development of the music, ceased to have any meaningful application some time ago. Gates were opened into new possibilities but they can’t be successively reopened however attractive that idea might seem. Better instead to focus on what’s done with those possibilities – as you say, at the micro rather than the macro level.

You and Colin bring up a really good point. Why does new music, or even old music, always have to be evaluated against some paradigm-shift metric when such a distinction becomes apparent only in hindsight and there is just so much more that goes into an album. It seems like we (and I) sometimes fetishize the often dubious "novelty" over other important creative elements: traditional and non-traditional forms of proficiency, innovation within a system, strategically crossing rather than simply destroying stylistic demarcations, a conscious and clever elaboration on the music's history (though I would stop well short of embracing the "in the tradition" fixation). I could go on, but I would just be repeating much of what you already say here, and what emerged in the discussion from yesterday. Cheers to a deeply insightful pair of reviews.

Another excellent review! You guys knocked it out of the park with these.