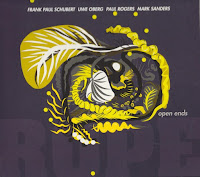 ROPE is a German/British jazz quartet consisting of four excellent musicians – Frank Paul Schubert (soprano saxophone), Uwe Oberg (piano), Paul Rogers (7-string double bass) and Mark Sanders (drums, percussion). In 2015 they’ve already released a critically acclaimed debut, on which the bass was played by Wilbert De Joode. Actually Paul Rogers was a founding member of ROPE, but he wasn't available for the first two gigs of the band, so De Joode filled in. Their second gig at the Just Music Festival Wiesbaden was recorded and released as their first album. Both De Joode’s chamber bass with its unique tonal qualities and Rogers’s 7-string bass with its wide sonic range are responsible for the band’s special sound quality.

Open Ends consists of two long tracks around 35 minutes each, “First Movement“ and “Second Movement." And indeed, the music is moving, it’s structured around musical waves that pile up and then run out. In both tracks the musicians proceed similarly. Almost classically jazzy, the bass inserts a rhythm, which works as a mock-up or as an actual announcement of something monstrous. Then Sanders’s drumming indicates that the wave is being built up. Especially the piano supports this with an increased use of the lower registers, the sax picks up the tempo, so that the structure of the piece becomes denser. Before the first wave in “First Movement“ Oberg plays patterns reminiscent of early Schlippenbach, especially when his chords dissolve into arpeggios. Schubert flies over these patterns, he floats up and down the modal scales. Sanders chases them with accentuated strokes on tiny cymbals and on the snare. Eventually, Oberg sets off a firework of driving riffs, culminations, powerful energy explosions, tinged short runs and little ornaments, which he displays in furiously fast passages.

The quieter sequences in the wave valleys are like havens of tranquility, Schubert's saxophone dreams itself away in the high registers, the bass is bowed tenderly, the piano throws in prepared snippets, the drums set small sound accents. It’s calm on the musical sea, there is hardly a breeze blowing, one might even be reminded of an idyllic scenery. But these moments don’t last long. Mostly the energy shifts happen almost imperceptibly. Fascinating are not only the intermediate phases, in which every small corner of the previously created sound universe is explored, but also the art of keeping the built-up wave at its peak for as long as possible. The musicians try to keep the waves there by bursting in elaborate passages and diving in sonorous experiments. Sometimes Oberg is in charge almost single-handedly with clusters and small trills, sometimes it’s Schubert with his runs that ricochet through the room while the whole process is whipped forward by Sanders and Rogers. Another interesting aspect is the way how the group channels the energy. In sudden changes of mood, harmonic cells seem to wander astray and get isolated for a short time, the music changes from full blasts and sharp sequences to lyrical ones, sweet and solemn, melancholic and meditative. It’s often Schubert's squeezed tones which ensure that a certain tension is maintained, even when saxophone and piano leave the field to bass and drums. These parts are a tour de force of a microcosm, as if the waves were plunging into a whirlpool, but revealing a macrocosm of delicate phrasing and concise sound shades. Essentially, the band keeps you on the edge.

Last but not least, there’s some great soloing, for example when Rogers’s bass dances in an almost chamber-musical way, which is reminiscent of Barry Guy. Extensive trills, harmonics, repetitive patterns and wild outbursts create a tense atmosphere. Another example is Oberg’s solo in the middle of the second track, in which he jumps from Monk-ish phrases to Fred Van Hove and Matthew Shipp.

At the end of the second piece, the musicians pull the improvisation apart, as if they shied away from each other. Again the tempo is picked up almost imperceptibly, again it’s the rhythm section that agrees on an idea, sets the direction and prepares the others for a last big wave. Here, accents are set by contrasts: dark saxophone lines meet extremely high piano chords. Finally, the piece almost runs dry, the band searches for last sound structures, rears up again and then falls silent.

It is available as a CD.

You can buy it from the label’s Bandcamp site:
https://troubleintheeastrecords.bandcamp.com or directly from Frank Paul Schubert: http://www.frankpaulschubert.de/