By Stephen Griffith
Two drummers, two generations. Hamid Drake began recording with Fred Anderson’s quintet, as Hank Drake, at the Moers Festival of 1978. From that point he's been one of the preeminent free jazz percussionists on demand throughout the world. Tim Daisy's first recording was in 1999 with Triage, a trio with saxophonist Dave Rempis and bassist Jason Ajemian. Since then he has amassed an impressive body of work on his Relay Recordings label and elsewhere. 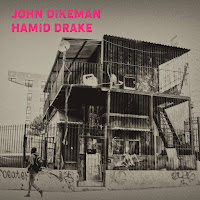 The first time I saw Peter Brötzmann perform, with Hamid Drake, I invited a contractor I worked with to go along. He had toured in one of Alice Cooper’s bands as his guitarist (I assumed it was true; he didn't seem like a liar and knew I could look it up) so I thought why not. Well he was confused, and not in a good way, by the saxophonist but was foaming at the mouth, in a good way, at Drake’s drumming; to the point where he called one of his buds in mid concert and said “you've gotta hear this guy”. He'd surely never seen a comparable economy of motion produce such intricately driving rhythms. So it was a successful evening. The point of this anecdote is to illustrate the abundant appeal of Hamid even to listeners outside of the genre.

You don't like to pigeonhole someone who is masterful in a variety of settings but being paired with big tenor players accentuates the talent of Drake to listen to, anticipate and add to the musical pathways being explored in a uniquely propulsively insistent way. John Dikeman has recorded two prior releases with Hamid and William Parker so the need to start at square A1 and work from there was already overcome. John’s no stranger to the blog either so I was not surprised by anything that transpired other than Drake’s ability to reveal facets of the saxophonist I hadn't noticed as much previously. In this case it was playing soft long lines in the altissimo range of the horn while Drake played deft understated patterns with the brushes. Of course there are honking rhythmic grooves where Dikeman plays his unique motifs in the post Ayler tradition, but these being driven so adeptly by Drake put them in rarified air for the audience at Slate Arts. If you're looking for a good tenor and drums free jazz outing, this is it. 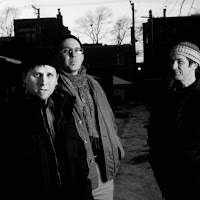 Tim Daisy needs no introduction here; preparing this review I was heartened at the number of his recordings covered on the blog. Likewise for Vox Arcana, with James Falzone on clarinet and Fred Lonberg-Holm on cello and electronics, having received favorable mention before this masterful gem from 2015. The current recording precedes all of them and represents the group's initial need to stretch their wings beyond just rehearsals and play in a live setting, even within the confines of a radio studio, before an appearance at The Hungry Brain scheduled for the following night.

Three of the songs, “The Silver Fence”, “Falling” and “White Lines” were subsequently recorded a year later for the first recording here and it's interesting to discover what transpired in a year's time (an out of print limited release on Relay, Live at The Hideout Chicago recorded on 11/7/2009 has the first two songs mentioned and “Anketa” which features a brief electronics excursion by Lonberg-Holm) as the songs, although thoroughly composed, became something different through repeated play. For example in the WNUR performance of “Falling”, Daisy midway through plays an extended snare roll with faint gong sounds enhancing the effect; a year later it was replaced by a syncopated sharp strokes with Falzone and Lonberg-Holm adding unison accents. Interestingly enough Daisy, a superb sound colorist, has no marimba on any of these songs but it was featured in different songs on all further releases.

Although the playing is more polished in the later versions, particularly by the clarinet and cello, there's something rawly appealing about these initial jumps in the deep end of the pool as the group starts to forge an identity. Not surprisingly as the composer, with the exception of what was mentioned in “Falling”, Daisy's playing is mostly consistent between dates. While playing no marimba, on “White Lines" he adds to his sound palette by using metallic objects on the drum heads as well as held percussion objects.

This is an enjoyable document of the early days of a now established group. Since Tim is presently working on a new book of music for Vox 4, augmented with Macie Stewart on violin and cello, there might not be anything new by the core Vox Arcana trio for a while. After the acclaim that “Roman Poems" received, I don't think that's a problem.