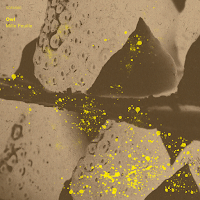 Signe Emmeluth (alto saxophone, electronics) and Karl Bjorå (guitar, electronics) play enchanting fantasias with a blend of composition and improvisation for 42 minutes across five tracks on Mille Feuille. Emmeluth and Bjorå play together frequently and have recorded with Emmeluth’s Amoeba and Spacemusic Ensemble; Owl is not a new grouping but this might be their first recording.

I first heard Emmeluth with Vetle Larsen (as Tigerfish & Lioncats) at Ingebrigt Håker Flaten’s Sonic Transmissions festival in 2016. Their second set still sticks in my mind as one of the strongest shows I’ve seen, with Emmeluth alternating between raging, fiery blows - like she was really trying to destroy the brass with a disintegrating wind - and quiet, textural breath- and spit-play. So I awaited her first few recordings eagerly, but was disappointed they did not match the range, technique, or emotivity of that performance; they seemed too jazzy, too composed, too sterile to me. Spacemusic Ensemble’s Is Okay Okay Is Certified from last year marked a transition towards looser, more textural compositions on her recordings; shedding the large ensemble, which often requires stricter composition, for an intimate duo here results in a more natural exchange, producing the first recording that seems closer to Emmeluth’s playstyle than composition style and is correspondingly her strongest recording yet.

The opening track is the sidelong “Upon Arrival You Forgot Why You Left.” It’s a topical connection but the album structure here, of a sidelong track with five short sketches, reminds me of the structure of Tortoise’s Millions Now Living Will Never Die or Oval’s 94diskont; and the proggy track structure, with sections of building layers (feuille) into a sonic melange separated by smart transitions, recalls “Djed” like the sputtering no-input mixing board might recall the glitchy “Do While.” These sections or superlayers combine breathy fluttering sax with purring no-input mixing board and soulful alto phrases with cosmic swells. Or rhythmic, marching clicks, stops, and mutes with cavernous digital water drops, valve releases, and overdubbed, infinite twinkling guitar arpeggios. Or dub bass droputs and sonar bleeps with sustained sax tones. Or bird calls and whistling tea kettles. It’s a delightfully textural trip constructed of studio-dubbed or live-looped lines from both musicians - whose sounds sometimes blend together - that ebb and flow with expert pacing. Despite that monolith of a track, the next vignette, “On The Lookout,” might be the standout track, with its eclectic mix of slow chord strum, sighing breath, pastoral flute-like effects, warbling sax, shakers, train horns, birdsong, relaxed pace, and spacious sound feeling like a lost recording from late-period Talk Talk or early-period Brokeback. We get a fiery altosolo from Emmeluth, complimented by detuned spidery guitar, on “Let’s Crackle” and the energy of a live performance actually begins to shine through this time. “Dive Deeper” and “Consensus” explore many of the same textures in different lights, with the former characterized by a bittersweet guitar melody emerging from the noise with a rocking bass lullaby and the latter becoming closer to ambient film score.

To continue the comparisons to other musicians above, I hear Emmeluth and Bjorå drawing from the wells of kosmische musik, film score, and new electroacoustic and electric sensibilities as much as from jazz. And like a fellow Dane’s work with yet another similar group in Spring Heel Jack, Emmeluth is almost uniquely able to cut through an electroacoustic maelstrom with powerfully vulnerable, soulful, human phrasing just like John Tchicai. By depending less on traditional composition and focusing more on mood and timbre, Emmeluth has produced her most promising recording. If you’ve not been wowed by her recordings yet, it’s time to give her another shot. And if you’ve not given her a shot, this is the place to start.

Mille Feuille is a CD-only release.