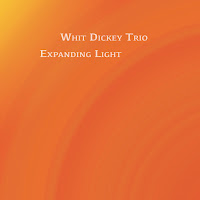 Drummer Whit Dickey is one of those artists who deserve greater prominence in the minds of free music enthusiasts. Although he’s a highly accepted player, especially in the New York jazz scene, he seems to be a bit overlooked. Frankly, his refined style should establish him among the greats of his instrument. His new album Expanding Light shows him with one of his long-standing collaborators, saxophonist Rob Brown. The two are augmented by the young formidable bassist Brandon Lopez, whose growing list of collaborators include Dave Rempis, Weasel Walter and John Zorn, for example.

Whit Dickey himself describes the experience of recording Expanding Light with his new trio (in 1998 Dickey and Brown released another album, Transonic, with Chris Lightcap on bass) as “incessantly and mightily grabbing the dragon by the tail, and not caring.” In other words: This is the good old free jazz tradition exploring musical territory the ensemble hasn’t examined so far, wherever it may lead. The result is both abstract and concrete, an overall experience influenced “as much by Nirvana at their finest as by the holistic experimentation of Dickey's mentor, Professor Milford Graves“, as the liner notes put it. That’s why Dickey himself calls it "free grunge."

Yet, one should not expect obvious grunge references here. The music on Expanding Light is rather characterized by different structural features. In all pieces the improvisation threatens to trickle away at least once, it almost seems as if the musical means are exhausted (which isn’t meant in a negative way). What is more, all pieces contain very differently worked out duo passages, both in terms of length and musical conception. Sometimes they introduce a track (“The Outer Edge“ or “Desert Flower“), sometimes they dominate its center (“Expanding Light“). Finally, on closer listening it becomes clear that it’s Dickey who controls the directions of the improvisations with abrupt changes from the cymbals to the toms (or the other way round), while the saxophone oscillates between bumpy riffs and straightforward runs. Most of the time one instrument gives the interplay a certain stability, either it’s a walking bass or the long balladesque tones of the saxophone that push against the dislimitation of the others.

A good example of all this is the title track, in which the saxophone starts playing crystalline melodies, however they are dissolved immediately. While bass and drums energetically challenge the sax to accelerate the tempo, it finally does that, but then it slows down again, tries riffs, levers them out and even stops. The structural motif of trickling down is used here, too.

Still, there’s the exception to the rule and that’s “The Opening“, ironically the piece that closes the album. Brown’s extremely overblown saxophone is actually reminiscent of grunge, with its vibrato-drunk lines and extreme distortions that meet a drone-like bowed bass. “The Opening“ is more of a bouncer, an encore, which eventually also seeps away with a little drum solo.

All in all, a promising relaunch of Whit Dickey’s new trio. Expanding Light is a very recommendable album.

Expanding Light is available as a CD and a download. You can both listen to “The Outer Edge“ and buy the album on the label’s bandcamp site.

You can also get it from www.downtownmusicgallery.com .