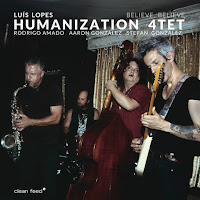 Now a unit for 12 years, this is the fourth release of the Lisbon-Dallas quartet of Luís Lopes (electric guitar), Rodrigo Amado (tenor saxophone), Aaron González (bass), and Stefan González (drums). Two years ago for their tenth anniversary, they embarked on a tour of the United States, during which they found their way to the Marigny Studios in New Orleans. OK. So, I am not sure that the location itself had any unique effect on these recordings, but the liner notes make a big deal out of it and this session took place just one month before I moved down here. To my chagrin.

The Humanization 4tet is known for its singular blending of free bop, funeral cool jazz, heavy funk, punk and postpunk, metal and, I imagine, pretty much any other musical influence you could associate with the fringes of early 2000s youth culture in the US and, apparently, in Portugal as well. In a way, they are the Iberian/American counterpart to projects like Fire!, The Thing, and even Angles, who have one foot firmly planted in a Holy Ghost fire-breathing folkish melodicism and the other in rock’s fringes. Indeed, these musicians experiment with boundaries, odd juxtapositions and juncture. Apart from Humanization, Lopes and Amado have appeared on countless releases often with the deeply variegated Lisbon scene. Lopes in particular has released some absolutely wild noise balladeering most recently through his Love Songs project and his duo with Julien Desprez. Aaron and Stefan have meanwhile been plumbing the pipelines linking grind, heavy angular fusion, and even stranger experimental music separately (especially Stefan in his percussion/vocals project Orgulla Primitivo, the experimental hip-hop group The Young Mothers, and the more classically crust Imperial Slaughter) and together (the blackened free-psychedelia combo Unconscious Collective and the S.O.D./Naked City love-child Akkolyte). That is, while still maintaining their two-decades-and-running free jazz trio Yells at Eels with their father Dennis González.

Surprise, surprise, Believe, Believe is a wonderous melting pot. It leans towards free jazz but has unmistakably contemporary shadings. Lopes plays his now characteristic jagged and deconstructed guitar lines, but he converges them with jazzier runs and rhythms. Synchronic themes piece together out of rough fragments of hard-bop melodies, which are then shredded into scraps that the band slowly pieces back together. Amado can play sultry. Just listen to the first minute of Ed Harris/Tranquilidad Alborotadora, the first section a Bill-Lee-penned tribute to the great eponymous saxophonist, the second a take on an Unconscious Collective composition. But, as anyone who has heard This is Our Language or A History of Nothing already knows, he can really open up and spiral into some mesmerizingly outre territory. The González brothers meanwhile hold clattery and off-time but steady rhythms, like Haden and Blackwell but even less predisposed to tradition and more interested in the heavy vamping and flailing percussion that have found an equally fitting home in their spazzier and more metallic undertakings.

Themes are catchy and may be ultimately rooted in bop, but the most noteworthy elements come when the musicians avail themselves of the melodic constraints and play on a feeling or simply on stored energy. These are the places where the punk-rock inspiration, the just-short-of-reckless abandon take over. And when they do, it is something to behold, even if it only lasts for a quick half hour.