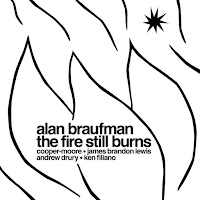 The Fire Still Burns is Alan Braufman’s new recording, on Valley of Search, the small label that re-issued his 1975 recording of the same name. Like the reissue from 2 years ago, this new release is welcome addition to Braufman’s slim discography.

The multi-instrumentalist Braufman joins forces with Cooper-Moore (piano), the lone holdover from the earlier release, and James Brandon Lewis (tenor sax), Andrew Drury (drums) and Ken Filiano (bass). The album was recorded mostly live at Long Pond (The National's studio) in upstate New York's Hudson Valley. This quintet runs the gamut in a tight, powerful, soulful 36 minutes that reaches into the past but is always in the moment. Oh, and the song titles help pointing your ears in the right direction. Let’s dig in, shall we?

On the opener “Sunrise” the music glimmers and shines at its own slightly languid pace like a sunrise before Cooper-Moore enters to stretching out the kinks of the previous night slumber. Braufman’s wakes up his horn and blows some forceful, strident yet controlled notes that sustain that rise and shine feeling as the band wakes up.

Cooper Moore starts the next track “Morning Bazaar" with soulful piano as Drury drops some nice shuffling grooves behind him and Filiano locks in. Then Braufman and Lewis join horns to sing before acceding to Braufman’s lithe flute. It’s an upbeat tune that lays a template for much of the later record. The musicians find freedom in that template rather than a dead end. In this case exploring a 70’s vibe with Lewis full-toned tenor taking it out.

“No Floor No Ceiling” kicks in with raucous unison horns and then Cooper-Moore’s piano threatening to go off the rails. Drury keeps a mean time and the cacophony settles briefly for Lewis to enter honking and screaming, too. There you are suspended, weightless as barbed phrases and percussive piano transport you to the New York loft scene. You think you need to catch your breath but just put your head down instead.

Filiano and Cooper-Moore head “Home” with a perseverant groove that invites the horns and drums to join them. Unity with many heartbeats making one pulse. Lewis gets a lot of air here, using the tune to scale the heavens of his horn. Ecstatic!

Here’s where you flip the record over...at least that’s how it feels to me.

“Creation” goes back to the beginning with horns in sync giving way to a piano-bass-drums interlude that packs a dissonant wallop. Pure energy. The horns return and state the them a few times in a what at first blush sounds like a loud beautiful mess but coalesces into counter points and cymbals crashing as music comes to life.

Whew, “Alone Again” is as close to a full stop as the record gets, the album’s Slow Jam, like going from 100 mph to cruising at 70. Cooper-Moore shines again with rolling notes accent by Drury’s forceful but not heavy-handed drumming. The horns sing low and slow

The closer, “City Nights” is a funky number with a Latin feel that makes sure you’re ready for the night ahead. Filiano grooves a bowed bass against the steady beats of Drury showing just how much a good band is comprised of individual talents. Braufman and Lewis dance again, at times it’s tough for my ear to differentiate between the two on tone alone. Dueling saxes find their way around the groove, teetering on its edge before they find intersection and unity in it. That’s when I just let my toes start tapping and be done with it. Congas take us out and it feels like the cab ride through the city is over.

The Fire Still Burns is a truly a group effort with an appealing balance of moods and tempos. It’s the sound of a band packing as much in a recording as tight and grooving as possible. The mostly live recording sonics accentuate the band’s dynamics. Braufman and the others make ebullient music that fuses talent and jazz touchstones to create a deft tapestry of sound and soul.