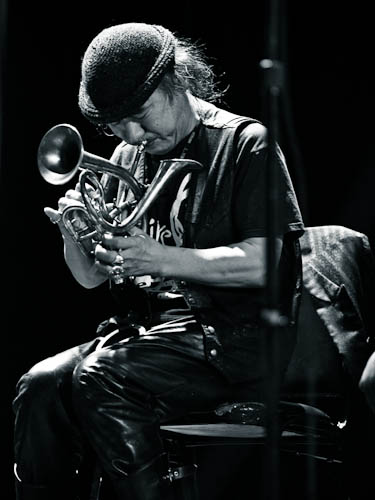 The great Japanese trumpeter Itaru Oki, one of the pioneers of the Japanese free jazz and free music scene, passed away on August 25.

Oki was born to a musical family in Kobe in Sep. 10, 1941. His father played the shakuhachi and his mother played the koto. Oki began to play the trumpet in a high school band and moved to Tokyo in 1965 where he joined the seminal experimental band ESSG with pianist Masahiko Satō and percussionist Masahiko Togashi. With that band, Oki did his first European tour with this band in 1969.

Oki relocated to France in 1974 but continued to play an important role in the Japanese free music scene, and since the mid-nineties toured Japan every autumn and recorded with many innovative improvisers like violinist Keisuke Ohta, pianist Satoko Fujii, trumpeter Natsuki Tamura, turntables wizard Otomo Yoshihide and drummer Sabu Toyozumi. Oki toured in Europe with Steve Lacy, Lee Konitz, and Art Farmer and recorded with many European improvisers (or the ones based in Europe) like bass players Alan Silva (including in Silva’s Celestial Communications Orchestra), Kent Carter and Benjamin Duboc, drummer Sunny Murray, trumpeter Axel Dörner, pianist François Tusques, and vocalist Linda Sharrock.

Oki led many short-lived bands, played also the flugelhorn and the shakuhachi but most of all liked to play odd-shaped trumpets. He was famous as a trumpet maker, including one with two bells, and for his unique collection of trumpets, shown in exhibitions in France.

Fujii said: “Natsuki and I are very shocked. We still cannot believe that Itaru passed away. He came to our concert of Kaze with Ikue Mori in Paris at the end of January. He was always passionate about music. As a person, he was extremely sweet and gentle. A few years ago, he told Natsuki, “Natsuki, let’s play trumpet until we are 100 years old!” He was very open to playing with anyone and was a big influence on musicians with his free spirit and warm and deep sound. Without him, we probably couldn’t make it into the Japanese music scene like now. He was very important to us”.

I was lucky enough to experience Oki's magical musical personality in the legendary Japanese club Shinjuku Pit-Inn in Tokyo in 2002. Oki led a sextet, with Fujii and Tamura, and in his unassuming way led an intense, quite anarchistic and always engaging set that included heartfelt covers of jazz standards, the mocking of famous haikus and truly passionate and inspiring performance of the art of the moment.

A great, highly individual player, no one like him around nowadays.
Big loss.
The celestial Sun Ra Arkestra is becoming bigger and bigger, hope to hear it
some day.