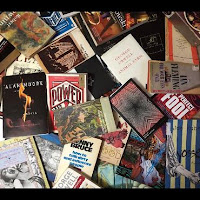 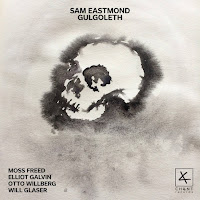 
In the years since Sam Eastmond and his big band joined the Tzadik roster, Spike Orchestra has recorded John Zorn’s Masada books Book of Angels and The Book Beri’ah. Now, on their fourth proper album, Eastmond and co. return with all originals, composed with all the layered, allusive density that’s become a hallmark of Eastmond’s other bands. As before, Spike Orchestra features Noel Langley, George Hogg, and Yazz Ahmed on trumpet; Mike Wilkins, Damon Oliver, Josephine Davies, and Gemma Moore on saxes and assorted winds; Harry Brown and Tim Smart on trombone; Jeff Miller on tuba; and a rhythm section of pianist Olly Chalk, guitarist Moss Freed, bassist Otto Willberg, and drummer Will Glaser.

The album cover, a photo featuring books by George Orwell, Franz Kafka, Charles Bukowski, Lenny Bruce, Ian Fleming, Margaret Atwood, and others, hints at the depth of references, as well as the compositions’ wry wit and sustained drama. Opener “The Pink Shagpile Carpet Story, aka The King of Spank,” kicks off with four minutes of call and response between brassy explosions commingled with the rhythm section and teasing invocations from the woodwinds. When the melody drops into place, trumpets swing at multiple octaves above the saxophones, creating a thrilling vertical space—it’s an excitingly Thad Jones/Mel Lewis-inspired moment that shows off the tremendous skills of Spike Orchestra’s lineup. Propelled by Freed’s Morricone-esque commentary, the orchestra shifts into a lengthy, hard-charging finale that positively jumps and shouts—in another, better time, you and a club of patrons would not be able to sit still for this one (n.b., my family’s been up and dancing about the living room to this album several times already). I’ve written about Eastmond’s Ellingtonian flourishes in the past, but the penchant for orchestral movements comes to the fore on Splintered Stories. “Here & Now” probes some deeply conspiratorial territory (echoes of Darcy James Argue from across the pond and amped by several more years of dread and disappointment), with a “Peter Gunn”-quoting churn, driven by Chalk, Freed, Willberg, and Glaser’s unrelenting funk undercurrent. Midway, a duo of trumpet and sax solos crisscrosses several countermelodies, disrupting the aged spy motif with the chaos of the present. We often use words like “elegiac” to describe something soft or plaintive in music. But Wilkins’s clarinet solo sounds closer to a true elegy, a reflection on what’s lost when the spy fantasies of our youth ripen to the tangled, sickening truth of the current moment. Though, perhaps, we can invert that interpretation, and hear this as a lament for what we’ve gained. That, like Odin, we sacrifice willingly, losing not our literal eye but our metaphoric vision of the world as it was. Heady stuff, for sure, but that doesn’t undercut the amount of plain old fun to be had with Splintered Stories. For readers who haven’t heard them yet, Spike Orchestra is a kindred spirit of our beloved Angles, whose biting wit and superb musicianship can be heard on songs like “Let’s Speak About the Weather (And Not About the War).” Like Martin Küchen, Eastmond is a master composer and arranger, and he and his band have delivered one of the most dangerously delirious albums of the year.

In the US, order direct from Downtown Music Gallery

In the UK or EU, order direct from Rough Trade.

Earlier this year, Eastmond debuted a new set of compositions, Gulgoleth, featuring his standing rhythm section of Freed, Willberg, and Glaser, joined by pianist Elliot Galvin. The album includes a version of “Standing On the Shoulders of Giantslayers” that’s markedly more nimble than the Spike Orchestra version from Splintered Stories. In place of the tapestry of horns, the quartet’s performance is buffeted by Glaser’s outstanding drumming set against Galvin and Freed’s rich, flowing performance. From the jump, the music is angular, raw, and driving. I don’t think Freed is as well known on this side of the Atlantic, which is something worth remedying. He has an especially playful approach, pivoting from echoey space-age chords to thrashing jazz metal riffs. Similarly, Galvin’s piano playing encompasses the wide range of styles on display here—the 10-minute “In the Grip of the Lobster” is one standout song that really highlights Galvin’s mutability. On a recent episode of Huw Williams’s podcast, Galvin talked about the influence Craig Taborn has on his piano playing. Throughout Gulgoleth, that’s more apparent than ever, I think, in part because you can hear how adeptly he moves from supporting player to lead, and how expertly he responds to Eastmond’s blend of abstract concepts and genre motifs. And then there are Willberg and Glaser, who form the dark heart of this music, driving both groups forward with great skill and a sense of humor that nicely complements Eastmond’s.

Of note, during the pandemic, Eastmond started working with arrangements of the Gulgoleth book for solo performers. The first is Brice Catherin on solo cello and electric cello.