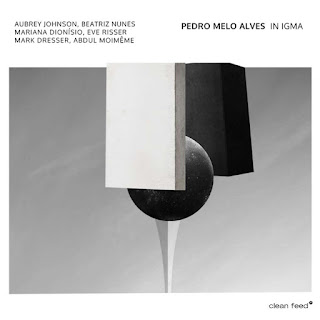 Pedro Melo Alves is a young Portuguese percussionist and composer whose work freely mixes composed and improvised components. His five-part composition In Igma, as mysterious as the conjunction of its title and spelling, arises where borders between the composed and improvised seem never to have been drawn, passages that could only result from both methods operating simultaneously, or one evolving seamlessly into the other. The group includes three singers: Aubrey Johnson, Beatriz Nunes and Mariana Dionísio; the instrumentalists are pianist Eve Risser, bassist Mark Dresser, guitarist Abdul Moimême and Melo Alves himself, employing a broad range of drums and percussion.

The highly developed, multi-dimensional, vocal component sometimes reaches the elastic virtuosity of Cathy Berberian or Barbara Hannigan, but then, in the same exploratory spirit, the singers’ vocal harmonies suggest a medieval choir, at once modal, warm and ethereal. The last effect is enhanced by some subtle mixing of additional vocal harmonies. That mixing and matching of the post-modern and the deeply traditioned will bring startling textures to the fore: at some points the three voices haves a cartoon helium quality, while in the concluding “In Igma III‒On Void,” another achieves an ecstatic ululation in the same stratospheric range.

Singers and instrumentalists alike operate at a special level of musicianship and invention, whether it’s Risser’s subtle, repeating dissonances or upper-register flights, or Dresser’s supreme sonorities whether it’s his arco cello voice or a dense pizzicato obbligato. Moimême’s unique sonic reach from guitar tones to electronic burbles and industrial percussion can lead to unidentifiable intersections of sounds, blending at one reach into Dresser’s bass and at another into Melo Alves’ array of drums and cymbals. The work is ultimately less a series of musical episodes than an evolving, compounding dream state, an abstracted musical narrative in which voices (instrumental ones included) intersect and transform. One looks forward to Melo Alves’ next extended adventure and hopes comparable companions are available.