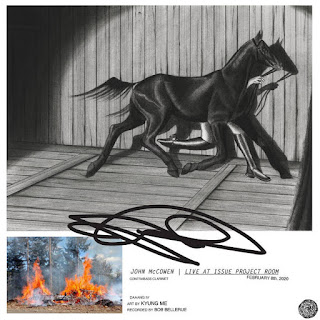 Clarinetist John McCowen catalogs the breadths and depths of the contrabass clarinet’s tone and timbre on Live At ISSUE Project Room. It is McCowen’s second release of the year thus far, after the fiery Bb skronk of Two Energy Cops At 3AM , recorded at ISSUE Project Room in NYC, at which the clarinetist is an artist-in-residence for 2020. By my count, it’s his sixth solo release in as many years, yet he’s still capable of pushing boundaries despite treading familiar territories.

Those familiar with McCowen’s work will find his characteristic drones - inhabited by a dynamic ecosystem of resonances and harmonic beatings - living and well here. The first section of this continuous 44 minute set catalogs his style in a series of increasingly technical fragments framed by silences, with a progression of something like: simple sonorous blowing > eventually reaching resonance > resonating immediately > manipulating resonant pulses > increasing multiphonics to three clearly audible lines > manipulating all three lines > increasing multiphonics to four audible lines > manipulating all four lines. And those four lines are, as is similar to much of his other multiphonic music, a low, deep drone, a high-pitched overtone, a kind of morse code, a distorted buzz. And they create a rich polyrhythm with each other, mercurial as sine wave pulses warble, fishtail, and eddy. What’s particularly amazing is that McCowen is able to pick up exactly where he left off after each silence, rather than build back to the state. This transitions to a running motor, with lines of didgeridoo and distortion, deep and bodily, punctuated by freight train overblows. Around the 26 minute mark, his playing is occasionally stepped, rather than sinuous, like a drop in dance music. The jaguar purr fades to pure fuzz, still multiphonic and dynamic, endless for his bottomless lungs, like a white noise maelstrom, still punctuated by high-volume high-distortion freight train horns - or a bellicose squawk - before returning right back to multiphonics. The effect is visceral, even violent, a fire revivifying the phoenix. The final few minutes feature restrained, ascetic play teasing out resonant, meditative waves, warm as a church organ hum.

Those familiar with McCowen’s work will recognize that these are the compositions originally recorded on Solo Contra, stretched out and backwards. Solo works provide a point of definition along the trajectory of a musician’s growth, unblurred by their work in ensemble; two solo works containing the same compositions provide an even clearer contrast between the younger and the older musician. Six solo works in six years might seem a bit much but, considering McCowen’s rapid growth since 2016 (when Solo Contra was recorded), evidenced here by audibly increased control of time, tone, timbre, technique, breath, and pulse, this recording feels like a necessary document. McCowen is at the cutting edge of clarinet sound. With compositional sensibilities that splay and clarify the instrument’s characteristics, now naked before the listener’s ears. I look forward to hearing this level of mastery in his next ensemble piece.

Live At ISSUE Project Room is a digital-only release.