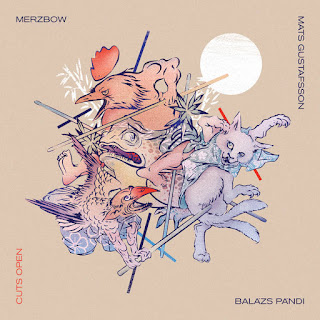 I am very thankful to RareNoise Records for publishing the “Cuts” records series. That’s what it is to me at least, a series.

In 2013, Merzbow, Mats Gustafsson and Balazs Pandi released a record under the name cuts. It was an amazing and disturbing listening experience. Listening for the first time, I remember the sheer force and power of the noise. I didn’t recognize any structures or notice calm, relaxing moments. It was noise in its purest form, and I was shocked. I had to listen to it again, and again. (During these repeat listenings, I eventually found some loose structures and rhythm, especially in Pandi's drumming.)

To bring this sound one step further, the trio became a quartet on the next two records: Cuts of Guilt, Cuts Deeper and Cuts Up, Cuts Out. They joined forces with Thurston Moore. What happened is what one could expect: the noise raged on. Unimpeded.

As I’ve listened to the albums and during the years, I have realized a few things happening in the music, especially that Pandi is keeping the whole thing together. His drumming is tight and fierce. It reminds the listener that there might have been something like rock or metal in his musical background. But he expands on this background, leaving it behind and sometimes the whole thing sounds as if all the bridges are burned to ashes. (Listen to the second track on cuts: “deep lines.cuts.”)

With Mats Gustafsson it was one of the first times I realized that he was using more and more electronics. In this setting I find it rather difficult to distinguish between electronic sounds and high pitched reeds or electronic altered sounds of the saxophone. And maybe it doesn’t matter in the context of this trio. All that matters was the force the intensity of the whole thing.

So this is the story before 2020 (for the listener, the record was recorded in 2018). We are back again with the trio that started the whole thing.

The new album “Cuts Open” was recently released, and it starts with… not silence but a few percussive (gong, cymbal) sounds. And space in between. Merzbow (I guess) starts with some white noise in the background, or on the ground might be the better image. Because it is not in the back but rather lays a foundation. Pandi stays with some gongs and percussion sounds. There is more electronic there to be heard (Gustafsson I guess) and it is intense.

Compared to the other three records (the metal albums of the noise-noise trio if I might say so), this is the rock or even pop album of the same noise-noise trio. Does that make any sense? I will try to get into it a little bit more.

A good way to get into it might be the change after the first 7 minutes of the first track: you hear Gustafsson play some spares sounds on the flute in almost complete silence around him. Before and after that there is percussion, drums and electronic. But in a much more differentiated way than on the records before.

On the second track you can hear Gustafsson breath through his saxophone! I mention this as an example of the airy sound on the record. Later there is a sound like the wind. As if it wanted me or you to hear that there is a lot more air to breath in the record. But the same track is intense and “speaks” of fear or other feelings that might take your breath away. From there the piece moves into the direction of a wall of sound without getting there completely.

To compare this record with the ones before: on Cuts there is no building of a wall of sound, because it starts there. We are already on it. With this album the three musicians discover the way to that wall and away from that wall.

I realize it is hard to describe: the three berserkers of noise-jazz-experimental music (whatever you might call it) might have proven everything there is to prove on the noisy side of town, so this time they are ready to relax, to open the space for each other, to explore the calmer side of noise town. It is still an intense record. The components are more or less the same but with space in between. (I wrote that a few lines before but it is still true.)

I don’t know if it is true to say that this is the best record the trio (quartet) ever made. It is a surprise. It is amazing to see (hear) these musicians take a bold step in a new direction without loosing everything they are known for. Without loosing intensity.

I recommend to get them as LP or CD because, besides all the music, the artwork is great and worth being seen in proper form.