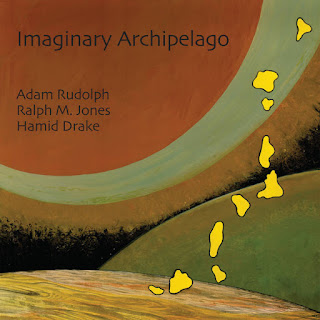 The sheer joy in discovering new combinations of sounds. The ecstasy of charting a fictitious but familiar world. The strange pummel of drums woven into a lush naturalistic arras of electronics and winds. Imaginary Archipelago is the second release from the Karuna Trio (Hamid Drake, Adam Rudolph, Ralph M. Jones) and it is a wonder. Sub-Saharan polyrhythms meld into North African trance which meld into other gradual, ritualistic repetition. The overlay of Jones’ reeds at times reminds me of Jan Garbarek’s work with Ustad Fateh Ali Kahn, Ragas and Sagas, minus the soaring vocals. At others it even touches on Marshall Allen’s EVI and the Arkestra, albeit with a different percussive vibe and fewer interstellar aspirations. Indeed, this seems more a spelunk into some parallel numinous realm than a turbulent ascent to the Afro-futurist stars.

On Imaginary Archipelago, the percussive textures are rich. The sonic tapestry is dense, a fact that is accentuated by Jones’ wafting melodies, Rudolph and Drake’s wandering drums, and, more broadly, the pulsing atmospherics. These lend the already soulful music an otherworldly character that relies more on spiritual/mental/metaphorical transcendence sheer strangeness. Oddness certainly abounds, but subtly. It remains a fine feature of the ambience rather than the central element. This stands in contemporary dub/electronic tracks such as Dimahala as much as the more acoustically driven Pitek or the slow, sweltering jazz meditation Chandirasa. (This one reminds me of a half-speed Herbie Mann’s At the Village Gate, though without the grounding of Ahmed Abdul Malik’s unwavering bass.) Often it is difficult to disentangle the processed sounds from the “pure” strings, surfaces, winds, and reeds. Was that tinny crackle natural or processed? How about that muted cluck, or that soft jangle, or that pervasive background static, or the brief references to splashing water near the end of Madazuba?

Imaginary Archipelago is a wonderful marriage of the old and new, of electronics and various acoustic devices. Drake and Rudolph are in top form and wend circles around each other in a way that few others can. Coupled with Jones’s masterful control of his various aerophones, the Karuna Trio has produced an album that simply entrancing.