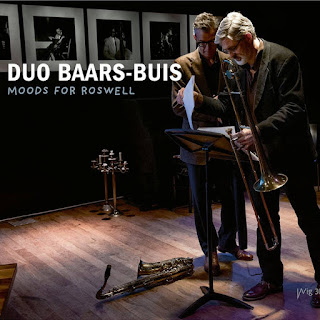 It's hard to believe it's been fifteen years since Kinda Dukish was recorded by the Ab Baars Quartet, formed for that recording by trombonist Joost Buis joining the reed player's longtime trio of bassist Wilbert de Joode and drummer Martin van Duynhoven to tackle selections from the Ellington/Strayhorn song book. You'd think that redoing the classics with innovative variations would be old hat for the New Dutch Swingers, to coin Kevin Whitehead’s term, given the ICP Orchestra, of which Ab has been one of the younger members, and its spinoff groups’ treatment of Monk, Herbie Nichols and some occasional forays into Ellingtonia. But the first cut of “Kinda Solitude” (Kinda was the prefix for all the new arrangements) sounded like Albert Ayler had been transported into the lead tenor spotlight which, after the initial shock wore off, worked out very well in a piano less quartet setting as the harshness dissipated into a soothing ending. Since Ellington tailored his arrangements around the sounds of his soloists, that gave ample leeway for the group to be respectful and innovative in a superb collection.

Since then Ab and Joost started playing informally together at their homes to work on composition ideas until the interactions became interesting enough that they started performing in concert as Duo Baars-Buis. Included in their practice sessions were new arrangements of Ellington compositions for just the two. Removing the rhythm instruments creates both challenges to coherently perform the pieces and opportunities to be innovative. And Buis, who studied with Roswell Rudd, to whom this release is affectionately dedicated, learned how to play very percussive counterpoint in his lessons with another Ellington aficionado. Fortunately the Ellington/Strayhorn body of work is largely familiar and unfailingly melodic so that musicians can nimbly work around the chorus before finally stating it without losing the attentive listener. This is what happens in the opening cut, “Sootywing (Black Butterfly)” as the two deftly flit around the melody without touching it like the namesake before finally lightly landing on it at the end. Baars’ facility on clarinet, advanced by studies with John Carter, carries the Jimmy Hamilton melody on “Catskills Cyclist (Sonnet for Caesar)” while Joost becomes a one person brass backing section through skillful use of mutes. “Wig Wise” was from the Money Jungle trio recording on Blue Note with Charles Mingus and Max Roach. Ab on tenor and Joost thoroughly deconstruct the melody in a languid manner, first in unison and then dancing apart, before briefly hitting it energetically hard near the end of “Two Ways (Wig Wise)”.

In keeping with the spirit of the original compositions, all of these ten adaptations are under five minutes. Two of the compositions, “Cool and Gentle (Mr. Gentle & Mr. Cool)” and “Hopkins Rudd (Jack the Bear)” (as a brief aside, before I discovered Hopkins was Roswell Rudd’s middle name an internet search revealed that Jack Hopkins is an international bear expert), were redone from Kinda Dukish’s “Kinda Gentle” and “Kinda Bear”. The current version of “Cool and Gentle (Mr. Gentle & Mr. Cool)” spends most of the time being gentle on the clarinet, albeit with a martial beat, before cooly strutting away at the end with blaringly muted trombone accents. “Hopkins Rudd (Jack the Bear)” travels in some inspired territory before returning to the theme. The final piece, “Moods for Roswell (In a Sentimental Mood)” features Baars on a ghostly ethereal shakuhachi before Buis almost imperceptibly inserts the Ellington melody at the end in a touching tribute.

The period between these Ellington based releases coincides with a gap in my not small music collection from the Amsterdam scene, a previous and ongoing source of great pleasure. Ab was very open about discussing changes in the club and concert venues there as well as the passings and retirements of some of the original key players. But he assures me that it is still a vibrant entity with an ongoing influx of new blood, and the ICP Orchestra still exists. This recording was like a letter from an old friend.