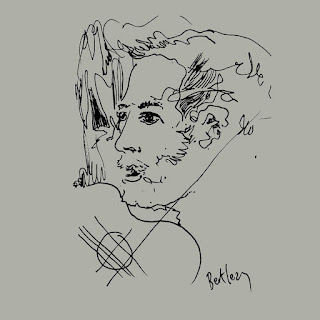 Bill Orcutt’s contribution to what we could call adventurous music of the past three decades is surely underrated. Starting with the amazing Harry Pussy, a trio which deconstructed and reassembled rock –one of the last to do that during the 90’s – leaving a great legacy after their demise. Following his long hiatus, he has been back with us for just over a decade now. During this second period of his career, playing solo or collaborating (like his mesmerizing duo with another great, Chris Corsano) he has been constantly shedding traditions and genre boundaries. His music is bluesy, freeform, and sometimes closer to an idiomatic view of rock, others his own take on free jazz. Many times his guitar (electric or acoustic) seems like his best friend, an instrument that is pushing him to the outer limits of personal expression. Like the devil.

His musical trajectory moves quite easily between humor, self-irony, rage and hope. But not rage against the machine, if you know what I mean. This release for Endless Happiness is a surprise. It shouldn’t have been considering that on this small and very interesting label there have been echoes of the electricity madness coming from the outskirts of free rock (do check Thurston Moore’s collaboration with Adam Golebiewski on the label). But Warzawa finds Orcutt alone with his electric guitar presenting two untitled tracks for this cassette.

Both tracks clock at around sixteen minutes and if you think that you want more (Orcutt’s music is never enough, I know), you should listen to its raw bluesy music coming straight out of Orcutt’s never ending personal vaults. He approaches the instrument with less appetite for experimentation but full of hope of catharsis. The chords of the guitar seem ever flexible, bending under expressionistic pressure fully taking advantage of the ritualistic nature of electricity on the blues-rock tradition. Electricity rains all over this cassette. For good.

The sardonic nature of Orcutt’s choices in music and how to present his stuff, often hide his knowledge of the transcendence he tries to bring out of his guitar. When I started writing this piece –listening to Warzawa at the same time-, my rating was four stars. It has ascended to four and a half stars; a well needed sentimental ascension during dystopian times. Go get the cassette before it sells out.