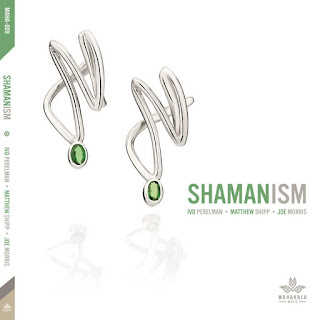 Ivo Perelman, Matthew Shipp and Joe Morris have worked together to produce a CD, part of a series where Perelman works with 3 guitar variations, the acoustic, (with Pascal Marzaon on Dust of Light/Ears Drawing Sounds), oud (with Gordon Grdina on the upcoming The Purity of Desire, which also includes the impressive Hamin Honari on Tombak and Daf) and here, the electric guitar.

'Prophets and Healers' is a superb, almost classical opening to the album with Shipp peeling back a layer just enough to reveal his inner Beethoven. Not so with 'Shamanism', which is more of a quick-fire conversation with piano and Perelman's sax in gloriously chipper altissimo mode. There are some intriguing turn abouts as the trio establish shifting shape formats of sonic objectivity, their capacity to instantly compose and listen resolutely resulting in some sonic sculpting and challenging harmonics. A glorious blast from the tenor in lower register indicates a shift in tempo and key at one point, whilst a chordal flurry from Shipp in another results in a helter-skelter career down the ascent form all three players. Shipp's gentle caress of the keys in the last few bars is beautiful.

'Spirit World' is darker, deeper and rumblings emanating from the piano strings contrast exquisitely with the rise and fall of the tenor tone. The trio paint soul-searching imagery which fires the mind as well as the soul and this time it is Perelman who shows a decidedly sensual side during the middle sixth whilst the last portion has the guitar sliding slickly into every gap imaginable. 'Trance' is mesmerising due to the complexity of the interactions. A thundering chord section from Shipp just before the half way point provides a shocking awakening before a gradual quietude descends and the sax sings, sighing over a set of punctuated, heavy chords.

'Altered States of Consciousness' is a sleepy, intoxicating, short number with Shipp again peeling back another layer to reveal his effusive, melodic twin. This sets up nicely for the delicious, wildly evocative 'Spiritual Energies' which sees the trio flying musically around each other, like ethereal banshees, occasionally weaving a portion of music around another but mostly flying in their own orbit, yet somehow linked inexorably to the other players, especially in the (almost) repeated harmonic sections in the first and final thirds. Beautiful.

'One Who Knows' sees Morris coming forward sound-wise on the guitar in the opening section, with the others revelling in the leadership shown, Shipp providing deep, emotive chords and Perelman stutting and flowing across the top. Punchy rhythmic patterns are offset by moments of near tranquillity in this shifting, contrast of a track. The final build out is superb, the angry piano complimented by the light touches of the guitar strings and the fade out leaves a sense of being stunned.

'Divination' is a lyrical, poster painted picture of a number with dashes of colour, a touch of grey and some dark shades of blue and black in there as well. Shipp is rumbling under the singing sighs of the sax whilst the guitar skips fluently across its 6 strings over the 88 of the piano. Even the final cheeky sax blast is perfect left in as it brings a smile.

'Supernatural Faith' is spiritual, celestial and carries within a sense of wonder and reverence whilst 'Religious Ecstasy' is crazily good with lots of interconnected developments, the musicians picking up and taking each others' offered themes and spinning them into something very beautiful.

This album is listenable and the imagination of the three musicians can be heard and felt as they circle each other and interact. What is noticeable is that every gap - even the tiniest half bar is immediately filled, as if it was a sin to leave any space un-played. At times the strings of piano and guitar meld and form a base upon which Perelman's sax builds and ricochets from but mostly this is three musicians improvising as they should, composing on the spot and producing something quite special.