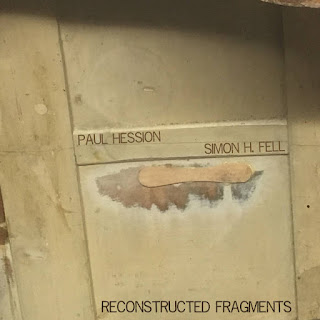 I never had the opportunity to meet Simon Fell or catch him live. Being a long term fan of the label he run, Bruce’s Fingers, from the 80’s, I was lucky enough to exchange some emails with him. Our brief discussions revealed a humorous, warm human being, full of empathy for this world and its creatures. This piece is dedicated to his memory.

The trio of Simon H. Fell, Paul Hession and Alan Wilkinson played an integral part in the revitalization of free jazz since the beginning of the 1990’s. Their recordings, truly extraordinary all of them, were fierce reworkings of the radical messages of 1960’s free jazz but stood on their own and, especially, were not meant to be eulogies of the past. As in all great musics, they were speaking for the current situation.

After being partners for a long time, Paul Hession and Simon Fell developed an interaction well worth listening I believe. On this duo, which is by no means a continuation of the trio’s sound but without reeds, the bond they have developed shows. The title, Reconstructed Fragments, is a hint on the small story behind the double-bass Fell played here: an almost broken instrument from central Europe that was slowly reconstructed by Hession. The cd is comprised by, adding to the fragmental nature of the recording, 7 “pieces” as they call them.

Apart from the aforementioned interaction, throughout the 44 minutes duration of the cd what is apparent is the collective skills those two have developed by playing together for a long time. Instead of a slower, maybe more down to Earth, approach that the two instruments (especially the double-bass) might allow, the duo’s flexibility and ability to change directions is refreshingly astonishing. Having a lack of technical knowledge for the double-bass, I found myself wondering if Fell was bending, twisting, even contorting the instrument into something far lighter and easier to handle. Hession, while being a drummer who can really play with fierce intensity, follows the same path, without any reluctance.

They exchange phrases and ideas all the time, improvising on the spot like two friends sitting close to each other and discussing, small talking or laughing. They make improvisational music –and how good that music is- with an ease, but not the one of the highly skilled musician, even though they are. This ease derives from their approach which is love, camaraderie and an urgent need for freedom and self expression. Do not miss out on this cd.