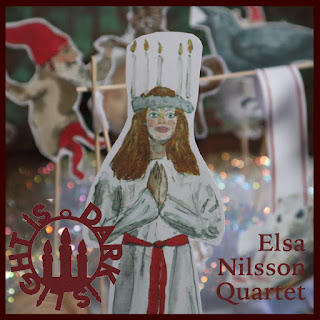 By Paul Acquaro
Elsa Nilsson, a New York City based Swedish flutist, has released an album that celebrates the music surrounding the holiday of Lucia, a festival of lights, held on the Dec 13th, the Winter Solstice (according to the Gregorian calendar). So, it's a holiday album, but not one of the typical ones that you may expect at this time of year. Nilsson and her quartet have crafted and honed these arrangements over the past decade, performing them annually in Sweden. However, due to the pandemic, the quartet sought a different way to celebrate this year, thus Dark is Light is.

Nilsson has been very active this year, in fact this is her third album since February. The first, Hindsight, is a jazz-rock statement that fits neatly next to the latest Soft Machine recording. It is dramatic, politically inspired music, as Nilsson writes on her website:

Hindsight started as a reaction. November 9th, 2016. I was home alone, feeling confused and betrayed after the election. My whole world had changed overnight and my faith in humanity was crushed. As I do in times of turmoil in my life, I turned to my instrument. I remember experiencing this pit in my soul, like we all fucked up and everything was about to go dark.

Hindsight, born under these conditions, is excellent and something that I've returned to many times. So is the album For Human Beings recorded by her trio South by North East. With Bam Rodríguez on bass and Rodrigo Recabarren on percussion, the music is a fascinating contrast of registers. The 31-minute track 'Forward' begins with a slow, gentle layering of simple legato lines, which builds with focused tension to a point where Nilsson kicks on the distortion pedal and blows a gnarled melody over the intensifying bass and drums.

Ahh, but I should be talking about the holiday album. Sorry. Dark is Light is' opening track, 'När Juldagsmorgon Glimmar,' which translates to 'When Christmas Morning Sparkles', is upbeat and lilting, you may even be tempted to think that you hear 'Frosty the Snowman' in the melody. It also rocks. Aside from Nilsson's warm, round tone is guitarist Jeff McLaughlin whose own warm, round tone often spins out sinewy lines and well chosen chords.

'Sankta Lucia' is a great example of all the adjectives used in the previous paragraph. Another upbeat tune, the blend of McLaughlin's sound with Nilsson's is inviting and energizing. The melody is elliptical, and as you let your ears ride along, the celebration is tangible. McLaughlin's solos over an insistent electric bass lines from Alex Minier, and Cody Rahn's drum work brings the group to a rousing crescendo. The penultimate track, 'Julpolksa,' is another great example of a smart arrangement and the quartet's compatibility. The sweet folk song melody leads to an exploratory passage, and as the joyful tones get stretched out, light touches of dissonance hint at a hidden depth. Then, it begins to wind tighter and faster. After Nilsson drops out, McLaughlin delivers a spacious and beautifully paced solo over the solid accompaniment.

Dark is Light is is a holiday album for a holiday that you may not even knew you needed. It comes at a real solstice ... things indeed got dark and the coming days hopefully will again be getting lighter.
Also check out the other albums mentioned: