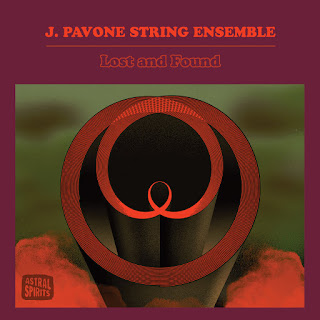 On Lost and Found, violist and composer Jessica Pavone reconvenes her string ensemble for a finer distillation of the elements established on the awesome Brick and Mortar. Erica Dicker and Angela Morris return on violins while Abby Swidler replaces Joanna Mattrey on second viola. Like on Brick and Mortar, at 5 - 7 - 9 - 5 - and 7 minutes, the track lengths seem patterned at 9 - 9 - 8 - and 10 minutes, though much more even-keeled. Likewise, the sound here is more subdued, the dynamics less ostentatious, and the music more engaging for it. The focus on a kind of dualism is more zeroed-in.

It’s hard not to see twos with this ensemble. Two violins. Two violas. Two groups of string family members. The musical process alternates between metered time and clock time, notation and improvisation. And it showcases counterpoint, though this ensemble’s approach seems less conversational or combative and more like following or herding. The track titles are colloquial terms of often opposing concepts heard together, “Rise and Fall,” “Pros and Cons,” “Lost and Found.” But these little dualisms are treated as complimentary rather than antithetical. And the strength of this recording comes from exploring the sympathetic spectrums between them.

As with Brick and Mortar, Lost and Found is not slow, but relaxed. Repetitive, but in movements. Mostly sustained arco that is more often clean and classical than distressed from extended techniques or heavy bowing. There’s a recurring bucolic inflection that feels simultaneously nostalgic and spirited. Pavone is adept at striking western ears with a bittersweet mood; if it teeters too suspenseful or uneasy, it’s just a setup for release. The music is most distinguished by the concurrent confusion and comfort of its counterpoint. Family member duos or individual instrumentalists phase in and out of time with each other. They ascend and descend at the same time, making it all the more powerful when two or even all four unite in one direction. They split and rejoin between high and low frequency tones. They quicken, slow, and re-match bowing tempos. As such the music is delightfully nonclimactic and always flowing.

“Rise and Fall” is a nice balance of all of these techniques. “Nice and Easy” swings the mood a little darker with warped descending glissandos that level off before descending again, only to seemingly bend back and ascend. The second track also contains a brief glimpse of something like a raga pulse which seems fitting given Pavone’s approach to musicmaking and the emotivity of her music. “Pros and Cons” features a little glued, hairy scraping and brief resonances between instruments. And the title track generates organ-like harmonics that get a little sine-wavy.

Lost and Found is perhaps a little less tuneful than Brick and Mortar, but delves deeper into the elemental dynamics possible with such a quartet helmed by Pavone. I find it a pleasant refinement that would be difficult to imagine improvements for if not for Pavone premiering her Lull project earlier this year, in which she expands this quartet with two cellos and two contrabasses, playing with western classical forms and featuring soloists Brian Chase and Nate Wooley. Pavone is undeniably a master of performance but with this ensemble she is picking up where Hope Dawson Is Missing left off to establish herself as a masterful composer.

Lost and Found is available on digital, cassette, and CD formats.