German guitarist Nicola L. Hein is a composer, philosopher, and sound artist who integrates philosophical ideas into music and plays music as a form of philosophy. 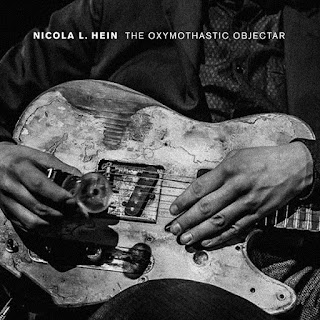 The Oxymothastic Objectar is a sonic-philosophical essay on the guitar as a tool of reflection about the question of skeptic music, and the skeptic form of improvisation. Hein relates to Ludwig Wittgenstein’s remark: “If you are not certain of any fact, you cannot be certain of the meaning of your words either… If you tried to doubt everything you would not get as far as doubting anything. The game of doubting itself presupposes certainty”, references shortly in his concise liner notes other philosophers like Hans-Georg Gadamer, Gilles Deleuze, René Descartes, and Georg Hegel, and the titles of the pieces are borrowed from Wittgenstein’s final notebook On Certainty. Hein concludes that music unfolds as self-constructing, self-developing, or as a self-accomplishing skepticism.

This solo project was recorded live at Spectrum, New York in March 2018. Hein plays his custom-made electric guitar, often with preparations, objects, and assorted effects. Hein employs the guitar as an infinite sound generator that incorporates sounds derived from electronic music and abstract noise and investigates methodically their kinetic qualities. He deconstructs any familiar pattern, pulse, or conventional dynamics. but sometimes surrenders briefly to the most unpredictable sounds. This sonic journey questions his personal relationship to the electric guitar, its extended vocabulary, to sound in its most abstract form and to the ongoing effort of organizing these sounds, and to the immediate physical effects of any sound, on himself, the musician, and in the recording space.

Hein does so with an impressive sense of control and imagination. Few of the pieces like the delicate drone “I cannot say that I have good grounds for the opinion that cats do not grow on trees or that I had a father and a mother” or the lyrical and arresting “I am sure, that my friend hasn't sawdust in his body or in his head, even though I have no direct evidence of my senses to the contrary” surprise with their poetic horizons. Free-improvisation - especially in the solo format - is indeed a highly personal journey that embraces skepticism.


Shug Monkey is not a philosophical concept but a cryptid, a creature that may or may not exist, supposed to have features of a dog and a monkey. Hein found the most compatible comrade for his cerebral, sonic journeys - Simon Rose, British, Berlin-based alto, and baritone sax player and researcher on the creative processes (author of The Lived Experience of Improvisation: In music, learning and life, Intellect, 2017). This duo was recorded at Studio Boerne, Berlin in December 2016.

The eight pieces are named after unusual creatures and mythological beings. These pieces offer unconventional and urgent dynamics for free-improvisation, highlighting the close and immediate interplay. Rose and Hein rely heavily on extended techniques and assorted effects as they collide fiercely with each other on pieces like “Ushi Oni”. Both treat the saxophone and the electric guitar as instruments that should first and all generate challenging, raw, abstract, and noisy sounds. The sparse and minimalist “Horse Face” and “Thoth” and the title-piece stand out as emphasizing the poetic qualities of this duo, surfacing from the sea of tormented and distorted sounds.

Glad you brought attention to The Oxymothastic Objectar, Eyal. I just picked up the album a few weeks ago and I am really digging it. Very strange and introspective.